Taiwan may scrap quarantine for arrivals about mid-October 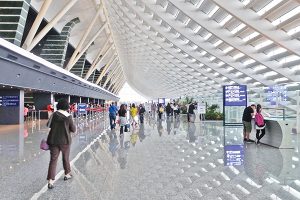 Taiwan may scrap its three-day quarantine requirement for arrivals around mid-October if the pandemic continues to ease, as the island joins other regional holdouts moving to reopen their borders to travelers.
The government will monitor the situation for another week, and plans to announce the easing two weeks ahead of the scheduled implementation, meaning the new rules would be effective around October 13, Cabinet spokesperson Lo Ping-cheng said at a briefing.
The measures would also include removing quarantine for tourists and lifting a ban on tour groups.
For now, anyone arriving will still need to quarantine, though they will switch to taking a rapid-antigen test at the airport instead of saliva-based polymerase chain reaction test, according to the Central Epidemic Command Center. The weekly arrivals cap will increase to 60,000 from 50,000 starting from September 29, with plans to further expand it to 150,000.
Signs that Taiwan’s recent spike in Covid cases is easing is paving the way for the relaxation, while the government has also been facing pressure to open up as the economy faces headwinds from slowing global demand for electronics, high inflation and rising geopolitical pressure from mainland China.
The island joins Japan — which is mulling allowing individual tourism and lifting a daily visitor cap by next month — and Hong Kong, which is also weighing ending mandatory hotel quarantine requirements, in gradually emerging from isolation.
Earlier this month, Taiwan resumed visa-free entry for travellers from countries it currently shares diplomatic ties with and the US, as well as other European nations, though the duration of their permitted stay varies.