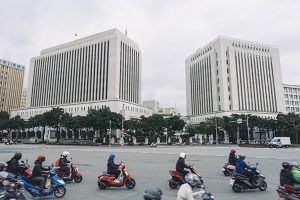 Taiwan’s central bank won’t impose foreign-exchange controls, Governor Yang Chin-long said on Thursday as he attempted to clarify earlier remarks about how aggressive the monetary authority might become to ensure stability in financial markets.
The central bank is capable of coping with capital outflows, Yang told lawmakers, acknowledging that foreign outflows are higher in 2022 than in previous years, amounting to more than $40 billion. The Taiwan dollar dropped this week to the weakest level since 2017, and pressure is rising on the currency as global funds sold tens of billions of dollars-worth of Taiwan stocks this year.
“The flood can’t be stopped, but it needs to be channeled,” Yang said when asked about the surging US dollar and how to deal with its pressure on regional currencies. “It is better to channel it than to block it.”
Yang’s remarks amounted to a clarification of comments he made to lawmakers earlier this week, when he said the central bank would closely monitor foreign outflows before considering control measures in case of significant foreign outflows due to US rate hikes or cross-strait tensions.
That statement was widely interpreted as the bank floating the prospect of foreign-exchange controls, though Yang said on Thursday that would not happen during his term, which runs through February, though he can be reappointed.
The central bank had already been trying to temper expectations of aggressive action before Yang’s appearance before lawmakers. The bank has issued a statement asserting that it would not adopt foreign exchange controls. Instead, the bank said it would use foreign exchange “management” measures to ensure market stability.
Yang on Thursday said the high foreign outflows this year were mainly due to the US Federal Reserve’s hawkish rate hike path, rather than tensions across the Taiwan Strait.
In a bid to support Taiwan’s currency, the central bank net sold $8.25 billion in the first half of the year, according to data from the authority.