Sweden’s Nato bid in doubt after Erdogan refuses to support 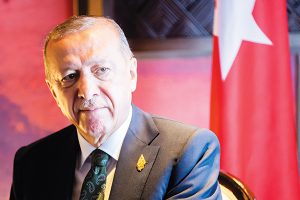 Turkish President Recep Tayyip Erdogan ruled out supporting Sweden’s bid to join the North Atlantic Treaty Organization (Nato) after an activist burned Islam’s holy book in Stockholm at the weekend.
Turkish parliamentary approval is required for the membership, so Erdogan’s comments suggest Sweden and neighboring Finland’s efforts to join Nato are now a more distant prospect.
“If you cannot show this respect, then sorry but you will not see any support from us on the Nato issue,” Erdogan said after a cabinet meeting in Ankara Monday, without indicating whether or not that meant the door for negotiation was now closed.
“Those who promote and turn a blind eye to this perversion have undoubtedly taken into account its consequences,” he said.
All but two of Nato’s 30 members have ratified the Nordic applications, and Hungary has said it plans to do so at the opening of parliament next month. That would leave Turkey as the lone holdout to the expansion, which Nato diplomats had hoped to finalize in time for the alliance’s summit in Vilnius in July.
Turkey is sensitive about any hostile act toward Islam, and the president is looking to strengthen support from nationalists and the religiously conservative ahead of elections slated for May.
Danish far-right activist Rasmus Paludan set fire to a copy of the Koran near the Turkish embassy in central Stockholm on Saturday. Paludan, who also has Swedish citizenship, has made a name for himself through a number of provocative Koran burnings, which last year led to protests and riots in Swedish suburbs where many residents are Muslim.
Paludan, who has been convicted of racism and defamation in Denmark, told a populist right-wing news site before the event that his aim is to promote freedom of
expression.
Turkey had agreed in principle to Nato allies including the US inviting Sweden and Finland to join the group, but went on to demand concessions from Sweden. Those included a broader crackdown on Kurdish groups that Turkey considers terrorist organizations alongside the extradition of suspects.
Sweden has insisted that it’s in compliance with an agreement hammered out at Nato’s June summit in Madrid last year, which allowed the expansion process to move forward.