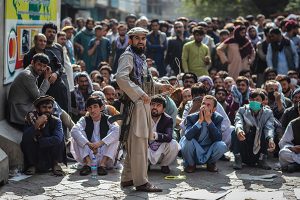 A suicide bomber attacked an educational center in Afghanistan on Friday, killing at least 19 students who were appearing in a mock university entrance examination.
The death toll could rise in Dasht-e-Barchi as the attacker, disguised as a student, has also injured 27 teenagers, Khalid Zadran, a spokesman for the Kabul police, said by phone. The victims were aged between 15 and 18. The area in the western part of capital Kabul has witnessed some of the country’s deadliest attacks since the Taliban regained power a year ago.
The latest blast highlights serious security challenges for the country, which has been facing dire economic consequences a year after the US withdrew its forces from the South Asian nation. Mosques, schools and workplaces have been under attack, with the IS claiming responsibility for 13 attacks against the Shia community, killing and injuring at least 700 people, according to Human Rights Watch.