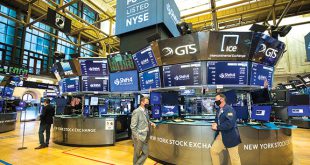 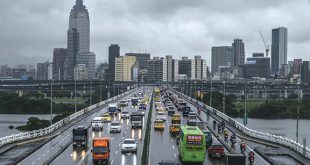 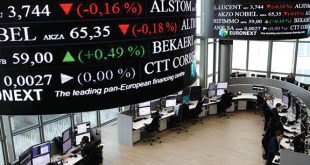 Stocks declined worldwide and emerging-market currencies slid to a one-month low after two Federal Reserve officials signaled that the U.S. economy could warrant a rate hike at the central bank’s meeting next month.
Equities gauges in the U.S., Europe and developing nations maintained losses, while the dollar pared gains after a report showed companies added fewer workers in April than estimated, dimming the prospects for higher interest rates. Russia’s ruble tumbled the most in more than a week and Malaysia’s ringgit dropped to the lowest since March. Oil traded at around $44 a barrel before stockpile data scheduled for release Wednesday that’s forecast to show a fuel glut is expanding.
The dollar has strengthened versus all major peers since Monday’s close after Atlanta Fed President Dennis Lockhart called a June rate increase “a real option,” while San Francisco’s John Williams said he would support such a move at the next meeting provided the U.S. economy stayed on track. Their comments are at odds with market expectations that assign it only a 10 percent chance. Anxiety over the pace of rate hikes coupled with signs of lukewarm global growth have damped a rally that’s pushed up stocks since February.
“We had several economic numbers that came out, and ADP in particular was weaker than expected, which is negative for the market,” said Richard Sichel, chief investment officer at Philadelphia Trust Co., which oversees $2 billion. “At the moment, data around the world isn’t being taken as positive. We started to test the upper end of the range, and with the absence of more good news to push the needle up, we’re consolidating and moving down.”
Figures from the ADP Research Institute showed Wednesday U.S. companies added 156,000 workers to payrolls in April, falling short of analyst estimates. A separate report showed U.S. worker productivity decreased for a second straight quarter and employer costs for labor climbed by the most in more than a year. Investors and policy makers are also awaiting the government’s monthly payrolls report on Friday.

Stocks
The S&P 500 slipped 0.6 percent at 9:38 a.m. New York time, after the U.S. benchmark lost 0.9 percent in the last session amid an uninspiring corporate earnings season.
Results from companies including Tesla Motors Inc., Priceline Group Inc. and Kraft Heinz Co. are due today. Investors are also monitoring U.S. presidential campaigns, with Donald Trump, the billionaire real-estate developer, becoming the presumptive Republican nominee after his top challenger, Texas Senator Ted Cruz, exited the race.
The Stoxx Europe 600 Index was down 0.9 percent, with all industry groups falling. Anheuser-Busch InBev NV — the world’s largest brewer — slid 2.3 percent after reporting sales and profit growth that missed estimates. BHP Billiton Ltd. tumbled after it was named in a $44 billion law suit over a dam rupture in Brazil that caused deaths and severe environmental damage.
The MSCI Emerging Markets Index of stocks fell 1.1 percent to the lowest in almost a month. Russia’s Micex Index dropped 1.9 percent as trading resumed following a two-day holiday. The Hang Seng China Enterprises Index fell 0.6 percent, dropping for a third day, and the Shanghai Composite Index slipped less than 0.1 percent.
Currencies
The Bloomberg Dollar Spot Index added 0.3 percent after climbing 0.7 percent Tuesday. The greenback fluctuated versus the yen around 106.62 and was at $1.1504 per euro.
Japanese Finance Minister Taro Aso said Tuesday, when the nation’s currency reached an 18-month high, that the government is monitoring speculative foreign-exchange trades and will respond if needed. The yen has strengthened more than twice as much as any other major currency in the past week as the Bank of Japan unexpectedly refrained from adding to stimulus at a policy review.
The MSCI Emerging Markets Currency Index fell for a third day, sliding 0.6 percent to the lowest since April 8. Russia’s ruble and Malaysia’s ringgit weakened the most versus the dollar, losing at least 1.5 percent.

Bonds
The yield on 10-year U.S. Treasuries fell one basis point to 1.78 percent, near the lowest in two weeks. German government bonds were also little changed, with the 10-year yield at 0.21 percent.
Turkey’s bonds fell before crisis talks between the president and prime minister scheduled for Wednesday that have prompted concerns over a power struggle. The Borsa Istanbul 100 Index of stocks dropped for a fourth day in the longest slump in four months, as the lira slipped 0.6 percent versus the dollar. Turkey’s 10-year bond yield was up nine basis points at 9.32 percent.