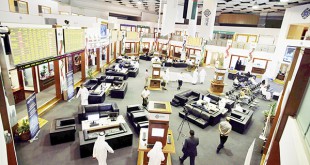 Dubai stocks gain most in ME as ECB spurs risk appetite

Investors are gaining confidence that March’s rally in equities and credit markets has further to run.
The Stoxx Europe 600 Index and the MSCI Asia Pacific Index were on course for the highest closes in two months. Shares in Egypt extended the longest rally since December after the country’s central bank devalued its currency, and thawing credit markets enabled UBS Group AG to hold the first sale of the riskiest type of bank debt in Europe for two months.
Economic data around the world suggest the global economy is far from the recession scenario that wiped almost $9 trillion off the value of equities worldwide this year through mid-February, and central banks are indicating they’ll support asset prices when needed. The Bank of Japan, which adopted a negative interest rate in January, will conclude a policy review on Tuesday and a Federal Reserve meeting ends Wednesday.
“We’re almost back to where we started the year,” said William Hobbs, head of investment strategy at Barclays Plc’s wealth-management unit in London. “After a muted initial reaction to the ECB action, markets finally decided that they liked the move because it signaled that central banks are not out of ammunition.” The Stoxx 600 rose 0.7 percent as of 11:45 a.m. London time. The dollar climbed against 13 of its 16 major peers. West Texas Intermediate crude futures declined 2.5 percent to $37.55 a barrel following four straight weeks of gains, and currencies of commodity producing countries dropped on Iranian plans to boost oil production.

Stocks
European stocks have rebounded 14 percent from last month’s low, with commodity producers and banks leading the gains. After a mixed initial response to the European Central Bank’s latest stimulus measures, the Stoxx 600 erased weekly losses on Friday to post its longest streak of weekly advances in a year.
Germany’s DAX Index was among the biggest gainers in western Europe, up 1.6 percent thanks to a jump in carmakers. Commodity producers posted the biggest advance of the 19 industry groups, with Glencore Plc and Anglo American Plc leading the advance.
Futures on the Standard & Poor’s 500 Index were 0.2 percent lower after the index jumped to its highest close this year on Friday as investors positively reassessed the ECB stimulus measures.
The Fed’s two-day meeting this week will be in focus as investors seek indications of the trajectory of interest rates. While traders are pricing in little chance of an increase on March 16, they have boosted the odds for later in the year.

Bonds
Benchmark Treasuries rose on Monday, with the 10-year yield falling one basis point to 1.98 percent. Morgan Stanley forecast the rate will fall to 1.45 percent by the end of September, approaching the record low of 1.38 percent set in 2012, and said the Fed will wait until December before raising interest rates. The U.S. bank also cut its end-2016 projection to 1.75 percent and lowered forecasts for yields on similar-maturity debt issued by Germany, Japan and the U.K., according to a report released on Sunday.
UBS Group was offering so-called additional Tier 1 notes, denominated in dollars. The market has been closed since mid-January amid a rout caused by investor concerns about bank earnings and the possibility that low capital levels would prompt regulators to prevent coupon payments on the bonds.
The cost of insuring investment-grade corporate debt against default held near the lowest since August.
Emerging Markets
Emerging-market stocks advanced for a third day, with the the MSCI Emerging Markets Index gained 0.7 percent, heading for the highest close since December, led by Egypt which is up the most since July 2013 after the central bank devalued the pound and announced it will adopt a more flexible exchange rate.
Egyptian shares were poised for a move into a bull market after the central bank devalued its currency by about 13 percent to stem a dollar shortage. Egyptian Financial Group-Hermes Holding Co., the Arab world’s biggest listed investment bank, jumped 9.9 percent, the most since June 2014 on a closing basis.

Currencies
The euro fell for a second day against the dollar as traders rebuilt bets on a U.S. interest-rate increase and a rally in stocks encouraged them to do deals that involve borrowing and selling Europe’s shared currency. The 19-nation currency is dropping from the highest level in almost a month, reached in the aftermath of the European Central Bank’s latest stimulus measures on March 10. The euro fell 0.4 percent to $1.1111, after adding 1.4 percent last week.
Russia’s ruble weakened 0.8 percent with oil as Iran announced plans to expand production countered a dwindling rig count in the U.S. Turkey’s lira fell 0.5 percent as the government pledged to retaliate to a suicide car bomb that killed at least 37 people in the capital on Sunday.
The rand slid 1.2 percent, leading losses among major currencies. South Africa’s Directorate for Priority Crime Investigation wants information from Finance Minister Pravin Gordhan on what he knew about a so-called rogue unit in the tax agency that investigated political leaders.
The Egyptian central bank devalued its pound by almost 13 percent at an “exceptional” sale of dollars on Monday. The central bank said it sold $198.1 million to local lenders at 8.85 pounds per dollar. That compares with a previous exchange rate of 7.73 pounds.

Commodities
The Bloomberg Commodity Index dropped 0.6 percent, led lower by oil after Iranian plans to increase output.
Iran plans to boost output to 4 million barrels a day before it will consider joining other suppliers in seeking ways to rebalance the global crude market, Oil Minister Bijan Zanganeh said, according to the Iranian Students News Agency.
Copper was little changed at $4,963.50 a ton on the London Metal exchange and gold gained 0.5 percent, after retreating 1.8 percent on Friday.