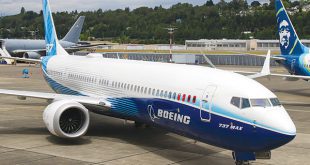 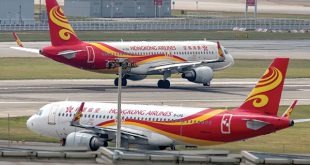 Skymark Airlines Inc. exited bankruptcy administration and forecast its first operating profit in three years after reducing its fleet, cutting routes and getting new funding.
The carrier expects to report 1.5 billion yen ($13 million) in operating profit and sales of 70 billion yen for the year ending March 31, Skymark said in a statement on Monday.
Skymark also said it’s targeting an “early relisting” of its shares after filing for bankruptcy protection last year. Private equity firm Integral Corp. took a 50.1 percent stake in the company as part of its turnaround, while ANA Holdings Inc. owns 16.5 percent and is supporting the airline in areas including aircraft maintenance and code-sharing.
“We wanted to make a plan that could withstand long-term changes in our operating environment,” Masahiko Ichie, president of Skymark, told reporters in Tokyo Monday. For the year starting April 1, 2018, the airline is forecasting operating profit of more than 7 billion yen and sales exceeding 80 billion yen.
Development Bank of Japan Inc. and Sumitomo Mitsui Financial Group Inc. own the remaining shares in Skymark.
The carrier began service in 1998 after the government deregulated the domestic market to boost competition. Since then, other airlines including AirDo Co. and Star Flyer Inc. have entered the market.
Skymark filed for bankruptcy protection in January 2015 with liabilities of about 300 billion yen after running short of cash to pay for Airbus Group SE A380 superjumbos it had ordered.
“Things were going well when Skymark ordered Airbus A380s. Then the economy changed and fuel prices went up,” Ichie said.

Skymark Airlines Inc. is a low-cost airline headquartered at Haneda Airport in Ōta, Tokyo, Japan, operating scheduled passenger services within Japan. In addition to its base at Haneda, Skymark is the dominant carrier at Kobe Airport and is the only domestic airline operating at Ibaraki Airport north of Tokyo.
Skymark was the first low-cost carrier established in Japan and is the only carrier offering domestic flights at Haneda Airport in competition with the duopoly of All Nippon Airways and Japan Airlines. Internet entrepreneur Shinichi Nishikubo controlled the company from 2003 to 2015, when the carrier filed for bankruptcy protection after attempting a fleet and service expansion