Singapore is no place to spend quarantine 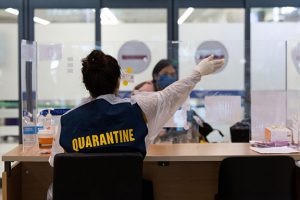 Imagine this: You test positive for Covid-19 and begin self-isolating at home. It’s Day Two of quarantine and you’re happier than Kevin McCallister in “Home Alone.” You’ve already completed a 500-piece jigsaw puzzle and binged the entire second season of “Emily in Paris” on Netflix. Everything is just peachy — until some authorities in hazmat suits barge in on you with a pint of Ben & Jerry’s in your hands.
You barely have time to grab your belongings before they whisk you into a van that’s hotter than the Totino’s pizza rolls you burned your mouth on earlier that day. They take you to a quarantine hotel and introduce you to your new roommate for the next three weeks: Bill. This man somehow looks even more disheveled than you. He tells you he forgot his glasses at home. You forgot your toothbrush, so things are looking pretty dire …
In Singapore, horror stories like these are no longer that rare. Rachel Rosenthal writes that due to omicron, travellers headed to the Lion City are dealing with all sorts of inhumane and haphazard rules. People have been shoved into ambulances with no information. They’ve been urged to abandon their pets at home. They’ve even been told to hand their unsupervised children off to authorities.
The average flight from New York to Singapore costs over $800. You know what else you can buy with $800 that doesn’t involve rooming with Bill for Christmas, or getting your child mercilessly ripped from your hands? A completely unnecessary but aesthetically pleasing red velvet espresso machine! An NFT that you could make with remedial Photoshop skills! Air compression boots that make you look worse than Jeff Bezos in space!
And that money doesn’t even begin to cover the post-quarantine fallout: Nothing quite says “happy holidays” like a mountain of
unexpected hospital bills.
—Bloomberg