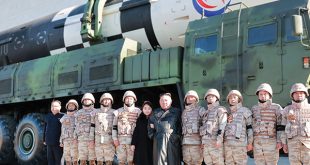 North Korea could get a lifeline from arms sales to Russia

Branches of at least three Russian banks have been attacked during a spate of weekend violence across Ukraine that coincided with the second anniversary of the ouster of Kiev’s Moscow-backed
leadership.
The latest incidents occurred overnight Sunday in Lviv — a nationalist bastion in the west of the former Soviet republic — where unknown assailants torched the central city office of Russia’s top bank Sberbank.
Another branch of the Russian state-held lender had its windows smashed. Police said the office of VTB Bank was also damaged.
The Lviv police department said on Monday that it had launched a series of investigations but had so far made no
arrests.
A Sberbank spokeswoman told AFP that the bank’s main Lviv office had been shut for the day while the bank’s other branches remained open.
Police in the restive southern government-controlled city of Mariupol that sits near the front where Kiev’s forces are fighting pro-Russian eastern insurgents said one of its Sberbank branches had its windows smashed early Sunday.
Sberbank said its Mariupol location remained opened Monday.
The violence began Saturday in Kiev during the day’s sombre commemoration of clashes between pro-EU protesters and riot police that claimed more than 100 lives in February 2014.
Far-right nationalists smashed the windows of two Sberbank locations and looted a branch of Russia’s privately-held Alfa Bank.
The same groups also targeted the Kiev headquarters of the System Capital Management holding company of Ukraine’s richest man Rinat Akhmetov.
Critics accuse the tycoon of taking a lenient stance toward separatists when rebellion broke out in the heavily Russified eastern regions of Donetsk and Lugansk in April 2014.
The February 2014 ouster of Moscow-backed president Viktor Yanukovych was followed by Russia’s March annexation of Ukraine’s Crimea peninsula and the onset of a separatist revolt that has claimed more than 9,000 lives.