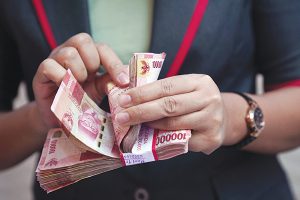 The rupiah is enjoying its best performance in more than two years as foreign inflows turbocharge its catch-up with emerging market peers.
The Indonesian currency climbed 1.2% against the greenback to 14,895 per dollar on Tuesday, its strongest in four months. It has surged about 4.7% over the last month, Asia’s second-best
performer.
The return of overseas bond investors has helped fuel the rally, with offshore funds pumping $2.4 billion into the nation’s secondary market this month, the most since June 2019, according to finance ministry data. The rupiah had lagged peers over the last three months as other emerging-market currencies rebounded quicker on bets of a slower pace of US rate hikes.
While the rupiah typically lags moves in regional peers, it could continue to strengthen after it breached the key 15,000 per dollar psychological level, said Mingze Wu, a trader at StoneX Group in Singapore.
“Considering we were trading between 14,800-15,000 between August to September 2022, it’s not a stretch to think further downside is still possible” in dollar-rupiah, he said.