Central banks are facing a moment of truth on crypto

Cyberwar on Ukraine may spread globally

A pandemic is a dream come true for gamers 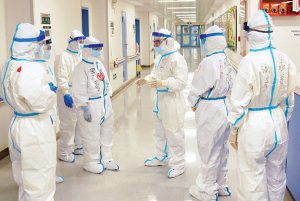 This could be the year when the global economy enters a new regime. No longer driven by minimal inflation in prices, negligible interest rates, steadily falling bond yields, growing inequality, and fantastic returns on asset prices, it’s possible that the return of rising prices in 2021 will at last force a new way of doing things.
With inflation a serious practical problem for the first time in a generation, the assumptions that “there is no alternative” to stocks, or that independent central banks can defend confidence in the currency, finally come into question. But nothing is certain in the exceptional circumstances that follow the pandemic, and as markets still try to digest the unprecedented interventions to deal with it. In theory, the explosion of inflation this year should have driven a big rise in bond yields, and might well have dragged down share prices. Nothing of the kind has happened. Will the market regime finally change in 2022?
The last great regime change came in 1971, when Richard Nixon abandoned the dollar’s tie to gold under the wartime Bretton Woods agreement. That ushered in an era of “fiat” currencies, unbacked by gold, and floating exchange rates. The order that eventually emerged, after the inflation of the 1970s, made independent central banks the new linchpin of the system to replace gold. Once confidence had been established that inflation had been beaten, long decades of ever-falling bond yields enabled the growth of the globalized and highly complex finance of today. Looking at the lessons from 1971 suggests that a new regime is needed now that inflation is returning.
The pandemic posed painful problems for science and the economy, but beyond anything else it proved to be a moral issue. Fighting a pandemic can only be done collectively, and that led to a series of classic moral dilemmas. On lockdowns, and then on masks, and then on vaccines, the issues were the same: How far can we be expected to go to protect others, and what rights do governments have to limit our freedom? And does a commitment to liberty render lockdowns or vaccine mandates immoral? The pandemic has grown so politically and socially divisive because many felt that their governments and neighbors were asking too much and trying to curb their freedom — but they may not grasp that respect for liberty requires everyone to respect the liberty of others.
In 2021, an initial inflation shock was driven by the transitory impacts of the pandemic, and only affected a few sectors of the economy. But then it steadily broadened to affect the entire economy, and raising the issue of whether the Federal Reserve, and other central banks, had left it too late to take action. With the aid of Bloomberg’s inflation indicators, which we have been publishing monthly, we can trace how wage rises and a steady shift in raw materials prices might have shown that inflation was returning.
Ever since China responded to the Global Financial Crisis of 2008, and helped the world recover from it with a massive monetary and fiscal stimulus, there have been concerns that the country will eventually have to suffer a financial crisis of its own. Chinese officials have long worried about a possible “Minsky Moment,” when investors suddenly lose their confidence in debt. The China Evergrande Group situation, with a stricken property developer left to negotiate with its creditors, appeared to signal the beginning of such a crisis. But for now, the evidence remains that Evergrande’s problems will slow the Chinese economy without crashing it.
The rise of meme stocks in 2021 was a classic speculative bubble, but with one crucial difference. Most bubbles through history are fueled by an excess of greed. This one was driven by rage — and perhaps desperation. The people piling into GameStop and other meme stocks wanted to force short-sellers out of business. They saw them as responsible for the financial crisis of 2008, and for the steepening inequality and injustice that followed it. Many of them felt as though they had nothing, and no alternative but to gamble everything on a few bets. Buyers were motivated by righteous anger, co-opting markets to right wrongs and improve society; nothing like that has happened before, and it’s a perilous situation.
—Bloomberg