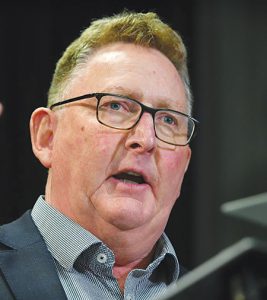 New Zealand’s central bank (RBNZ) still has some work to do to tame inflation but the bulk of the heavy lifting is behind it, Governor Adrian Orr said.
“We believe we still have some work to do, but the good news is because we’ve done so much already, the tightening cycle is very mature, it’s well advanced,” Orr said at an event on Tuesday in Wellington.
The Reserve Bank has “a little bit more to do before we can drop to our normal happy place, which is to watch, worry and wait for signs of inflation up or down,” he said.
The RBNZ has raised the official cash rate from 0.25% to 3% over the past year and last month forecast it will rise to at least 4% by early 2023. ANZ Bank New Zealand economists predict the OCR will need to peak at 4.75% next year to sufficiently cool the economy and curb price pressures.
Orr said demand “will be slowing.”
While inflation of 7.3% is “too high,” New Zealand’s rate is lower than in many other countries, he said.
He also noted that while the New Zealand dollar, along with “almost every currency in the world” is falling versus the greenback, boosting the cost of imports, a lot of supply side constraints are easing.
“While the tin may be higher, the cost of getting the tin here is much lower, as well as energy prices, so you’ve got a lot of offsetting positive supply shocks starting to help us,” Orr said.
In a relative sense, New Zealand “sits in a very strong position,” he said. “We’ve come through this extremely well.”
The New Zealand’s next rate decision is on October 5.