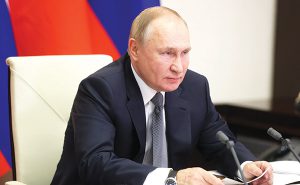 President Vladimir Putin threatened a military response to counter Nato expansion towards Russia’s border, while insisting he wasn’t issuing an ultimatum as he heaped blame on the US for rising tensions in Europe.
The US and its allies “must understand that we have nowhere to retreat further” and Russia can’t allow them to deploy missiles in Ukraine that would be a few minutes’ strike distance from Moscow, Putin told senior officers at the Russian Defense Ministry. “This is at the doorstep of our home.”
Russia will “take adequate military-technical response measures and react harshly to unfriendly steps” by the North Atlantic Treaty Organization (Nato), Putin said, without elaborating on a phrase that could refer to weapons deployments. “Armed conflict and bloodshed are absolutely not our choice,” he said. “We want to resolve the question by political and diplomatic means.”
Putin hit out after Russia demanded that Nato withdraw forces to the positions they held in 1997, before the alliance expanded to include former
Soviet satellite states in eastern Europe, as part of proposed new security treaties.
The US and Europe accuse Russia of a massive build-up of troops near Ukraine in preparation for a possible invasion as early as next month, something Russia denies.
Nato Secretary General Jens Stoltenberg said the alliance wants “meaningful dialog” with Moscow and he plans to call a Nato-Russia Council meeting as soon as possible in the New Year. Nato suspended practical cooperation through the council after Russia’s 2014 annexation of Crimea, though the two sides have met at ambassadorial level numerous times.
“A dialogue with Russia needs to be based on the core principles of European security and to address Nato’s concerns about Russia’s actions,” Stoltenberg told reporters in Brussels.
If US and Nato missiles appear in Ukraine “the flight time to Moscow will be reduced to 7-10 minutes, and if hypersonic weapons are deployed — to within 5 minutes,” Putin said.