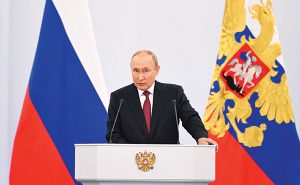 Vladimir Putin vowed his annexation of four occupied regions in Ukraine is irreversible, as the Russian president formalized Europe’s biggest land grab since World War II and accused the West of trying to subjugate his country.
“They will become our citizens forever,” he told officials in a Kremlin ceremony Friday before he and Moscow-installed leaders signed annexation documents. He demanded Ukraine stop fighting and begin talks, but refused to negotiate about the territories he’s absorbing. “We will use all means available to us to defend our lands,” he said.
The United Nations has denounced the annexation as illegal. Ukrainian President Volodymyr Zelenskiy condemned the move, vowing to press ahead with his counter-offensive. Dialog “is impossible with this Russian president,” he said. In response, the US added hundreds of Russian officials, including Putin’s central banker and energy chief, to its sanctions list. “We will not stand by as Putin fraudulently attempts to annex parts of Ukraine,” said Treasury Secretary Janet L. Yellen. The European Union also planned new restrictions.

Offensive Struggling
With his troops losing ground to a Ukrainian counteroffensive, Putin has been struggling to revive his seven-month-old invasion. He’s ordered the mobilization of 300,000 reservists to shore up his battered army, triggering an exodus of Russians trying to avoid being sent to the front. Putin has brandished the threat of using nuclear weapons to protect Russia’s sovereignty over the newly acquired territories, drawing warnings of harsh retaliation from the US and its allies.
In his speech Friday, Putin didn’t mention nuclear weapons specifically with regard to the defense of the annexed areas. But he denounced the US for using them on Japan in 1945. “The United States is the only country in history that has used nuclear weapons,” he said. “Creating, by the way, a precedent.”
Before the address, Kremlin spokesman Dmitry Peskov called the talk of nuclear escalation “irresponsible” and declined to say whether attacks on the annexed territories may meet the standard for using the weapons set out in Russia’s military doctrine.

Land Grab
Putin is laying claim to about 15% of Ukraine’s land area, making the move the largest forced annexation in Europe since World War II.
“This is comparable to Austria and Belgium combined. Or Denmark, Belgium and the Netherlands combined. Or 30% of Germany,” Estonian Prime Minister Kaja Kallas said in a statement. “Russia tries to rewrite the map of Europe.”
Peskov said Putin has no plans to visit the annexed zones at present, Tass reported.
The Russian leader devoted much of the 37-minute address to reiterating his denunciations of the US and its allies for allegedly trying to turn Russia into a “colony. ” Lashing out at what he described as the “pure satanism” of Western liberal values, he said Russia has its own views on the issues of gender and family. The signing ceremony ended with a smiling Putin holding hands with the four regions’ Kremlin-installed chiefs as he joined in chants of “Russia” in the hall.