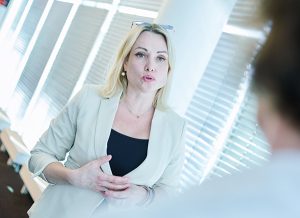 A Russian journalist who staged an anti-war protest on the country’s main TV news channel said police raided her home in Moscow as part of a new probe against her.
Marina Ovsyannikova said 10 police and officers from the Investigative Committee, Russia’s equivalent of the FBI, searched her apartment early Wednesday and took her away for questioning. A criminal case under Russia’s “fake news” law was opened over a protest she staged near the Kremlin last month that criticized President Vladimir Putin for civilian deaths in his war in Ukraine, she said in a Telegram post.
“Are more than 350 children killed in Ukraine fakes?” Ovsyannikova wrote. “How many more children have to die for you to stop?” Ovsyannikova was a producer at First Channel, Russia’s main national network, when she interrupted the state TV news in March to stage a rare public protest weeks after Putin ordered the invasion, holding up a sign during a live broadcast that said “They’re lying to you.”