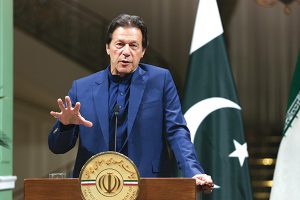 Recently ousted Pakistani Prime Minister Imran Khan asked his supporters to march on Islamabad, the nation’s capital, for a sit-in on May 25 as a way to press the government to quit and call new elections.
Khan’s move is likely to fuel further political instability in a country already facing an economic crisis from rising inflation. At a press conference in Peshawar, the former cricket star urged his backers to protest for as long as needed. Khan recently has held a series of rallies — aimed at channeling anger against the government of new Prime Minister Shehbaz Sharif — drawing massive crowds across the country.
“We will not accept this government,” said Khan. “We will sit in in Islamabad until they dissolve the assemblies and announce a date for elections that are transparent and without any foreign interference.”
Khan, 69, was ousted in April after a no-confidence vote in parliament. He blamed the US for “conspiring” to engineer his downfall, a claim the administration of President Joe Biden has rejected.
The former leader’s plan puts the new government on the defensive as it attempts to deal with mounting public anger from Asia’s second-fastest rate of inflation, currently behind only Sri Lanka. Pakistan’s foreign exchange reserves of $10.2 billion are enough to cover less than two months of imports, stocks have tumbled 6% in a month, and its currency is trading at a record low of 200 rupees to the US dollar.
Pakistan’s international bonds due in 2031 fell to a record low on Thursday amid investor concerns the government’s hesitation to take unpopular steps like raising fuel prices will delay an IMF bailout.
Khan’s call to his followers comes as Pakistan is working to negotiate the remainder of a suspended $6 billion loan program with the International Monetary Fund that’s needed to help shore up dwindling foreign exchange reserves. The multilateral lender wants Sharif’s government to roll back fuel and power subsidies as part of any agreement for aid.
Pakistan’s Information Minister Marriyum Aurangzeb didn’t immediately respond to a request for a comment.
Pakistan is scheduled to hold general elections in August 2023 when the National Assembly, the lower house of the parliament, completes its five-year term. Khan came to power in 2018 after an election where it was widely believed he had the support of the nation’s powerful military. However, that backing dwindled by the time the opposition challenged Khan’s majority in parliament.
Protests are not new for his Pakistan Tehreek-e-Insaf party, which sees itself as a disruptor on the South Asian nation’s political scene.
In 2014, party supporters held a sit-in for over four months in Islamabad demanding fresh elections after accusing then-premier Nawaz Sharif of rigging elections.