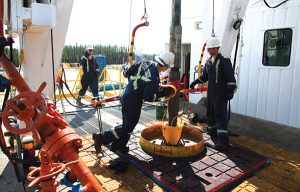 Oil rises as traders assessed the outlook for demand amid the rapid spread of omicron.
Futures in London climbed above $72 a barrel in a volatile trading session on Tuesday, having fallen about 5% over the past two days. The new virus variant accounted for 73% of all Covid-19 infections in the US last week, but city traffic in Europe held up over that same period, pointing to a limited demand impact so far.
Crude’s gains came against the backdrop of surging gas and power prices in Europe, with France even burning fuel oil in a bid to keep the lights on. The oil market got a boost from expectations that there would be a major switch in power consumption toward crude and petroleum products earlier in the year, and natural gas prices in Europe were above $300 a barrel of oil equivalent on Tuesday.
Still, oil has faltered towards the end of the year, in part due to the emergence of the new Covid-19 strain ahead of winter. The oil market structure is flashing bearish signs, indicating near-term over-supply, which may require Opec+ to act when the group meets next month.
“A relief bounce is unlikely to drive a major turnaround in sentiment with the Brent prompt spread signalling an oversupplied market” said Ole Hansen, head of commodities strategy at Saxo Bank A/S.
The rout across financial markets was exacerbated by Senator Joe Manchin’s rejection of President Joe Biden’s roughly $2 trillion package. The president spoke to Manchin, a conversation that the White House believes left the door open to revive talks on the spending plan, according to a person familiar with the matter.
Meanwhile, global oil and natural gas discoveries are heading for the lowest level since Harry Truman was the US president, according to Rystad Energy. US refiners are ramping up gasoline shipments to overseas markets as they balance lucrative export margins with firm domestic
demand.