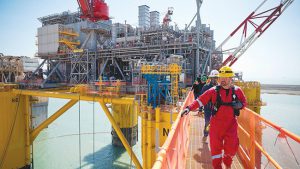 Oil tumbled to its lowest price in almost a year as a wave of unrest in China punished risk assets and clouded the outlook for energy demand, compounding the stresses in an already volatile crude market.
West Texas Intermediate sinks towards $74 a barrel following three weeks of losses, while Brent traded at around $81. Protests over harsh anti-Covid measures erupted across the world’s largest crude importer over the weekend, including in Beijing and Shanghai, spurring a broad selloff in commodities as the week opened. The rare shows of defiance raise the threat of a government crackdown.
The protests are the latest setback to an oil market that has looked increasingly shaky in recent days. The nearest portion of the Brent and WTI futures curves flipped into contango — a bearish structure indicating oversupply — with physical markets also under pressure. Speculators markedly reduce bullish bets, posting the sixth-largest reduction in net-long
positions on record for Brent last week.
More volatility is likely coming for oil in the coming days. Opec+ will meet on December 4 to decide on its next output level, while European Union nations negotiate plans for a price cap on Russian crude that looks set to have minimal impact on trade.
“The current sentiment is anything but upbeat,” said Tamas Varga, an analyst at brokerage PVM Oil Associates Ltd. “It is not only confirmed by the weekly fall in outright futures prices but also by the contango that made a re-appearance both in WTI and Brent last week.”
Congestion data from Chinese search engine Baidu showed peak-hour traffic in major cities declining sharply Monday morning. In the capital Beijing, traffic was down 45% from a year ago, while in Guangzhou it was 35% lower. Chinese oil demand could average 15.11 million barrels a day this quarter, down from 15.82 million a year ago, according to Kpler, a data and analytics firm.
Adding to the outlook for higher supply, the US moved to grant supermajor Chevron Corp. a license to resume oil production in Venezuela after sanctions halted all drilling activities almost three years ago. The sanctions relief comes after Norwegian mediators announced the restart of political talks between President Nicolas Maduro and the opposition.
Meanwhile, JPMorgan Chase & Co. cut its outlook for next year, analysts including Natasha Kaneva wrote in a report. The bank sees Brent crude averaging $90 as it expects Russian production to hit prewar levels by mid-2023.