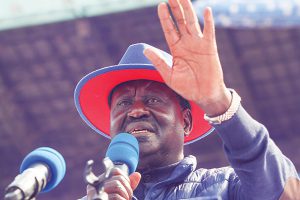 Former Kenyan Prime Minister Raila Odinga, who lost the August 9 presidential elections by a tiny margin, rejected the outcome of the vote and vowed to take constitutional steps to challenge it.
Odinga, 77, who was making his fifth run at the presidency and secured 48.9% of the vote to Deputy President William Ruto’s 50.5%, said the head of the electoral commission didn’t follow due process, rendering the results declared “null and void.”
“Today I do not want to fully address our strategies going forward but it is suffice to note that I will be pursuing all constitutional and legal options available to us,” Odinga said at a briefing in the Kenyan capital, Nairobi.
The dispute and delay in the swearing-in of the new president poses a risk to political stability in East Africa’s largest economy, where previous controversial votes were marred by violence. While a number of Odinga’s supporters took to the streets of Nairobi, the capital, late Monday and set tires alight, the situation was largely calm on Tuesday and there haven’t been any reports of clashes between the two rivals’ backers.
Odinga’s statement came moments after four of the nation’s seven electoral commissioners held a separate briefing and said they didn’t accept the outcome, citing a lack of transparency over the process. It was the second statement the officials released following the result.
Earlier on Tuesday, the Election Observer Group, which comprises 5,000 local monitors from civil rights and religious organizations, said the official count from the Independent and Electoral Boundaries Commission was consistent with its parallel tally, and the constitution gave the body’s Chairman Wafula Chebukati the right to declare the results.
Ruto, 55, said the IEBC had “bent over backward to accommodate everybody,” the election results spoke for themselves and their validity was being questioned by those who didn’t want to accept that they had lost. “The people of Kenya have spoken and we need to respect what they have said,” he told reporters in Nairobi after he was declared the president-elect.
The yield on Kenya’s 2032 Eurobonds dropped by 59 basis points to 11.98% by 4:00 p.m. in the capital, Nairobi after surging on Monday.
Odinga successfully petitioned the Supreme Court to annul the 2017 election, but didn’t participate in the subsequent re-run, which was won by incumbent President Uhuru Kenyatta, because he said the conditions weren’t in place for a credible contest.