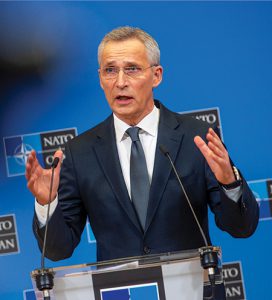 A meeting between senior Russian and Nato officials in Brussels is running longer than scheduled as the two sides continue their diplomatic push to ease tensions over Moscow’s troop build-up near Ukraine.
The encounter comes after a US-Russian meeting in Geneva earlier this week, with Western diplomats still struggling to discern the real intentions of Russian President Vladimir Putin towards Ukraine.
The topics at Wednesday’s meeting at the headquarters of the North Atlantic Treaty Organization in Brussels included the more than 100,000 troops that Russia has massed on Ukraine’s border, prompting fears it is preparing an invasion, as well as Moscow’s demands for curbs on the alliance’s expansion further east.
Jens Stoltenberg, Nato secretary general, was due to speak to reporters Wednesday afternoon. US Deputy Secretary of State Wendy Sherman and Russian Deputy Foreign Minister Sergei Ryabkov were planning their own separate briefings.
Russian state media has provided intense coverage of this week’s talks, sending more reporters to Geneva than their Western counterparts and reporting even the smallest details like opening handshakes.
Russian officials have touted as a triumph what they say is the agreement by the US and its allies to finally discuss the Kremlin’s security concerns seriously after years of brushing them off.
The Kremlin, which has denied any plans to invade Ukraine, said the decision on whether to continue diplomacy will be based largely on the outcome of Wednesday’s discussions.
War between Nato and Russia is “unthinkable” because it would lead to a wider global conflict, Latvian Prime Minister Krisjanis Karins warned in an interview with TV3. “Russia is not afraid of Nato forces, Russia is afraid of Ukraine’s democracy,” Karins told the broadcaster on Wednesday.
Meetings of the Nato-Russia Council had been frozen since an encounter in 2019, amid tensions over issues including the Russian annexation of Crimea, a Moscow-backed uprising in the east of Ukraine and a clash over alleged spying.
The Nato talks will be followed by discussions in Vienna under the framework of the 57-nation Organization for Security and Cooperation in Europe on Thursday.
Nato must never let Ukraine or other ex-Soviet states such as Georgia join the alliance, calling it an issue of national security. The US says every nation has the right to decide its alliances and that Russian troops continue to threaten an invasion of Ukraine.