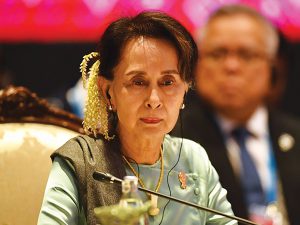 Myanmar’s deposed leader Aung San Suu Kyi was sentenced to six more years in prison on Monday in a judgment that could further anger supporters of the 77-year-old Nobel peace prize laureate.
A special court inside a prison compound in the capital Naypyidaw found her guilty of four corruption charges related to a charity named after her late mother, according to people familiar with the matter who spoke on condition of anonymity because the proceedings aren’t public. It’s the fourth round of criminal verdicts against Suu Kyi since the military seized power in a 2021 coup and brings her total jail term to 17 years, extinguishing any chance of her staging a political comeback while the junta remain in power.
Mandalay Region High Court Judge Myint San ruled that Suu Kyi caused the State to lose more than 24.2 billion kyat ($13 million) by leasing land in Naypyidaw to build the headquarters and related projects of Daw Khin Kyi Foundation, a charity which supported public health and education, at a cheaper price than the rate set by the Internal Revenue Department, according to people familiar with the matter and state media.
Earlier court sentences triggered public anger and intensified armed resistance led by the shadow National Unity Government. Junta troops have killed nearly 2,200 civilians and arrested more than 15,000 others since the coup, according to the Assistance Association for Political Prisoners, which this month said that prisoners in the country are suffering human rights violations.
The junta had accused the deposed leader of misusing public donations to the foundation to build her residence in Naypyidaw and accepting bribes worth $550,0000 from a businessman as a donation to the charity in 2019 and 2020. Suu Kyi denied all allegations and pleaded “not guilty.” Three other senior officials, including deposed Naypyidaw mayor Myo Aung and his deputy Ye Min Oo, were sentenced to three years each in prison for the same charges