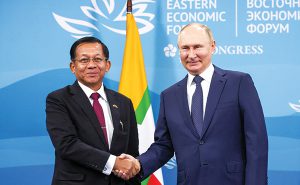 A Myanmar military-linked party has named a close ally of junta chief Min Aung Hlaing as its leader, a sign the country is gearing up for national elections next year.
The Union Solidarity and Development Party’s executive members elected Khin Yi as the new chairman to replace Than Htay who resigned due to his health. The party had also failed to win the 2020 general elections that saw Aung San Suu Kyi’s National League for Democracy take the majority.
Khin Yi, who served as the party’s acting chairman last month, is widely seen as a close ally of Min Aung Hlaing. He was the immigration minister under the current administration until he stepped down in August during a cabinet reshuffle, fueling speculation he would take up a bigger role in the party.
“We will make necessary arrangements to increase the number of party members, supporters and those will back our party in various ways,” Khin Yi told a party conference Wednesday. He added that he would prioritize building unity within the party and gaining public trust.
The top roles in the party are dominated by ex-military personnel and former ministers. The newly-formed central executive committee, elected from 275 executive members, is looking to win enough seats to form a government in cooperation with the people and the military, USDP spokesman Nandar Hla Myint said earlier.
“The decision at the general assembly is the most important because it is crucial to the future of our party as well as our country,” he said. “We are fully confident that we will yield the best result in the 2023 general elections.”
The military-backed party won only 33 seats out of a total of 476 in national parliament in the 2020 polls. Suu Kyi’s party won 396 seats, prompting USDP to call for a fresh vote, citing election fraud.
This led to the military staging a coup in February last year, which saw top civilian leaders arrested and the poll results were annulled even though international observers said the elections were free and fair.
Since the military coup, the Southeast Asian country has been gripping with soaring inflation and shrinking foreign-currency reserves amid international sanctions.
The World Bank has said the economy remains weak due to high inflation and worsening external pressures. The military government is embroiled in conflict with armed ethnic armies and supporters of Suu Kyi. Junta forces have killed more than 2,300 civilians and arrested over 15,700 others since the coup, according to the Assistance Association for Political Prisoners.