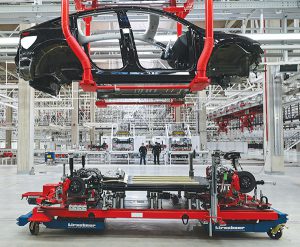 Anything with a hint of green was taking it on the chin after Senator Joe Manchin of West Virginia rejected the Build Back Better Act. President Joe Biden’s signature legislative package contained roughly half a trillion dollars of support for various forms of cleantech, the biggest federal commitment to the energy transition by far.
Tesla Inc, the electric-vehicle pioneer, took a hit of 3%, which seems predictable enough. Yet it looks as if the bigger losers are those old automotive stalwarts Ford Motor Co and General Motors Co.
Not long ago, Tesla’s chief executive officer, Elon Musk, ruffled feathers in that
way he does by saying the Biden legislation should be canned because its subsidies for EVs weren’t needed. Besides the usual grab for attention, the message was self-serving. Tesla benefited enormously — crucially, even — from subsidies on its expensive cars, both from the federal government and California, from which it recently decamped to Texas (a big “thanks y’all” to Sacramento). It also took advantage of loans from the Department of Energy. But it doesn’t need that now. It has used up its allotment of federal rebates in vehicles. Even though it potentially stood to get more under the new legislation, Tesla’s brand is established enough that it doesn’t necessarily need them. It also has its own proprietary network of chargers set up.
Most of all, despite seeing $320 billion of market cap wiped out in the past six weeks or so, Tesla is still valued at close to a trillion dollars and more than 100 times forward earnings. As it proved with multiple capital raises in 2020, at that sort of valuation, the stock market is your ATM. You can raise money almost more easily than the president can — he has to deal with the likes of Manchin, whereas Musk merely holds out his hand to HODLers.
This is why the Build Back Better package is more important for the likes of Ford and GM. They have certainly enjoyed a tailwind this year as they have talked up their own EV strategies and, in Ford’s case, launched a successful vehicle in the form of the Mustang Mach-E.
Even so, they trade on single-digit multiples, and Tesla’s valuation loss since early November is more than double their combined market caps. With far less capacity to simply tap the market, they need the risk capital that the legislation would put into vehicle rebates, charging infrastructure and manufacturing credits. As it stands, if the legislation is dead, the Biden administration will lean more heavily on regulatory levers to push its green agenda. That includes stiffer fuel-mileage standards, which is more of a stick than a carrot for the incumbents (and another thing that Musk simply need not care about).
The brake that this could put on the broader momentum in cleantech investing may conceivably hurt Tesla. On the other hand, Tesla’s cultish aspects (and stock surge) predate Biden’s election victory. It is just as likely that the incumbent automakers, which have enjoyed a taste of Tesla’s valuation aura as they have touted electrification, suffer the fallout.
—Bloomberg