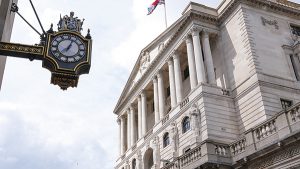 Kwasi Kwarteng signed off on £100 billion ($113 billion) of bond buying by the Bank of England (BOE) as the market fall into turmoil last week, higher than the size of the plan announced by the central bank and an indication of the level of concern among officials about volatility in the gilt markets.
The BOE took emergency action to prevent a problem in pension funds turning into a broader market crash, implying it was prepared to buy £65 billion of long-dated bonds to quell the turmoil.
The Chancellor of the Exchequer agreed to a request to approve purchases of as much as £100 billion when the plan kicked off, according to a letter released last week from Kwarteng to Mel Stride, a member of Parliament who leads the Treasury Committee.
The BOE didn’t mention the higher amount when it started the program, which is funded through the creation of central bank reserves and run through its Asset Purchase Facility. When the size of that facility is increased, the Treasury has to make a corresponding move to indemnify the purchases.
“The bank has requested an extension to the maximum size of the APF by £100 billion to £966 billion,” the Chancellor wrote in a letter dated September 28. “There was a special urgency to incur this liability.”
The usual exchange of letters between Kwarteng and BOE Governor Andrew Bailey to approve the increase has not yet been published.
The plan started last Wednesday with the BOE offering to buy £5 billion on each of the 13 working days through October 14, suggesting a total of £65 billion. The letter to Stride makes clear officials had the ability to increase buying if needed. That tallies with
the bank’s pledge to buy in
“whatever scale is necessary.”
In reality, the buying has been far smaller. The BOE has bought about £3.7 billion out of a potential £20 billion across the first four operations.