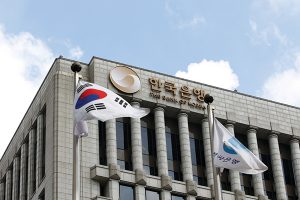 South Korea is continuing with efforts to ease strains in its credit market, with local financial firms making a second round of contribution to a key bond stabilisation fund redeployed in October.
The companies will inject an additional 5 trillion won ($3.7 billion) into the fund between December and January, according to the Finance Ministry. The Bank of Korea will provide as much as 2.5 trillion won of liquidity via repo transactions to participating firms, Finance Minister Choo Kyung-ho, Bank of Korea Governor Rhee Chang-yong, and heads of financial regulators said at a joint press conference on Monday.
The move is part of an already-announced government aid program worth more than 50 trillion won ($37 billion) to arrest the worst run-up in money market yields since the global financial crisis. While authorities have taken steps to reduce the turmoil caused by a developer’s surprise default in September, BOK’s Rhee has said that the stress is confined to a specific market segment and there’s no need yet to reactivate a pandemic-induced support mechanism.
Authorities will also seek additional measures for lower-rated corporate notes related to real estate project finance and construction sectors, as well as commercial paper with an A2 rating, according to the finance ministry.
In addition to the stabilisation fund, authorities also have relaxed the collateral standard for securities used in repo transactions with the central bank and asked companies to refrain from selling new bonds. Financial institutions have already paid 3 trillion won into the fund.
Yet even with these measures, yields on three-month commercial paper have continued their ascent. They touched a fresh 13-year high on Monday, although the pace of increase is set to be the slowest since September, Bloomberg-compiled data show.
Bank of korea seen opting for smaller interest-rate hike
The Bank of Korea is poised to return to its usual pace of policy tightening as it aims to rein in inflation without exacerbating credit risks that threaten to weigh on economic growth.
Fifteen of 17 surveyed economists see the central bank raising its key interest rate by a quarter percentage point to 3.25%. The remaining two expected it will back up last month’s half percentage-point increase with another move of that scale.
The BOK has delivered two half-point hikes this year as it sought to keep pace with the Federal Reserve’s rapid rate rises and stem pressure on Korea’s currency. The faster-than-usual tightening fuelled angst in credit markets that were already
roiled by the default of a local government-backed developer.
“The BOK will be under pressure to provide more liquidity to the market to maintain financial stability, especially amid growing concerns about a liquidity crunch in the bond market,” said Chong Hoon Park,
an economist at Standard Chartered Bank Korea.
The credit rout adds to a growing list of risks to the nation’s economy including a fall in exports, a rapid cooling in the housing market and inflation that remains elevated.
In its quarterly forecasts, the central bank is expected to lower its 2023 economic growth estimate while maintaining the inflation outlook, according to Societe Generale.

Consumer-price growth edged up to 5.7% in October after the currency weakened at the fastest pace in Asia in the third quarter, boosting the cost of food and energy imports. BOK Governor Rhee Chang-yong has complained that the won’s depreciation offset the benefits of falling oil prices.
In its quarterly forecasts, the central bank is expected to lower its 2023 economic growth estimate while maintaining the inflation outlook, according to Societe Generale strategists Oh Suktae and Seong Kiyong.
“A slight rebound in October headline inflation has seen calls for continued monetary tightening, while clearer signs of a slowdown in activity indicators and the sustained ‘credit crunch’ in the corporate credit market also lessen the chances of a 50 basis-point hike,” they said in a research note.
That doesn’t mean the BOK is anywhere near the end of its tightening cycle. Indeed, a 25 basis-point hike risks allowing the rate differential with the Fed to widen to 1.25 percentage point within the space of month, creating an “uneasy” situation, said An Young-jin, an economist at SK Securities.
The currency falls to a 13-year low last month, driven by the Fed’s sharp tightening and Korea’s snowballing trade deficits.
The won has since stabilised and returned below 1,400 per dollar following slower than expected US inflation and expectations the Fed may also opt for smaller hikes. The switch in sentiment is providing some relief for Korean policy makers.
“The governor may hint that the pace of rate hikes will slow from this meeting, but the terminal rate will still be higher” than the current expectation of around 3.5%, said Tieying Ma, an economist at DBS Bank Ltd.