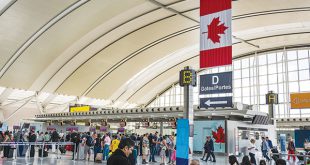 Jambojet, the low-cost carrier owned by Kenya Airways Ltd., plans to add seven routes in east Africa in the next five years to expand in the region.
The airline, which says it controls 37 percent of Kenya’s domestic aviation market, is considering starting its first international route this month, Chief Executive Officer Willem Hondius said in an interview in Nairobi, the capital, declining to give more details. It will also add at least one more aircraft this year to its existing four as it gradually boosts the fleet to 10, he said.
“We want to be a greater Eastern African operator, flying to Rwanda, Burundi, Tanzania, Uganda, the Comoros, South Sudan and Goma and Kisangani in eastern Democratic Republic of Congo,” Hondius said March 31.
Economic growth in the countries that Jambojet is targeting, along with its home market of Kenya, is expected to average 5.2 percent this year, outpacing the 4.3 percent expansion in sub-Saharan Africa that’s forecast by the International Monetary Fund. Rival budget carrier FastJet Plc, which was founded with the ambition to become a pan-African carrier, last month said it’s closing routes on the continent after sales failed to meet expectations.
Jambojet’s parent company, Kenya Airways, last year reported the biggest loss in Kenyan corporate history and is currently in the midst of a $690 million reorganisation in which it plans to reduce the number of aircraft it operates and cut at least 600 jobs. The stock has dropped 43 percent over the past year.
Jambojet has no plans to become a pan-African operator, nor will it seek to target other markets outside the continent, Hondius said. “The target is to grow the market and increase passenger frequencies at a controllable pace,” he said. “We will never fly intercontinental — you cannot make money there.”
Jambojet reported a 57 million-shilling ($561,577) profit in the first half of 2015 after posting a 237 million-shilling loss a year earlier. Full-year results are expected to be announced in June. Hondius said the airline carried half a million passengers in the whole of 2015 at a 75 percent load factor, which measures the number of seats sold. It’s targeting 20 percent more passengers this year with an 80 percent load factor.
The airline plans to add a 78-seater Bombardier Inc. Q400 to its fleet this year, enabling it to add more routes in Kenya, where it currently flies to six destinations. It currently flies Boeing Co. 737-300s and a Bombardier Q400.
“We want one additional aircraft, which means we can do four to five more flights a day,” Hondius said. “We would like to fly to Wajir as soon as it ready safety-wise. Isiolo airport is under construction and it is close to Nanyuki and other destinations, so there are good reasons to fly there.”
Isiolo is in central Kenya, close to game reserves that draw foreign tourists, while Wajir is in northeastern Kenya and serves as a transit route for flights to neighboring Somalia.