Kellogg serves its investors a snack 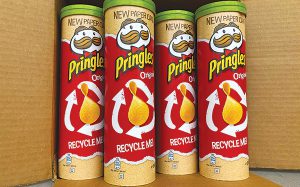 Kellogg Co announced plans to split into three separately listed businesses. The aim is to turbocharge sales and profit growth. But the maker of Pop-Tarts and Pringles is also providing something for potential bidders to snack on.
Kellogg will spin off its North American cereals arm and plant-based food unit from its global snacking operation. The shares rose as much as 5.5%.
It is the latest corporate giant to take an ax to its empire. In November, General Electric Co said it would split into three units, ending its conglomerate structure. Just days later, Johnson & Johnson said it would spin off its consumer-health arm, following in the footsteps of rival GlaxoSmithKline Plc. GSK’s consumer division, now known as Haleon, which makes Advil painkillers and Sensodyne toothpaste, will list in London next month.
Kellogg said that under its new structure, each standalone unit would be able to unlock its full potential. Freed from the shadows of the most successful parts of the organisation — in Kellogg’s case, snacking — each division should be able to bring more focus to its operations, make faster decisions, and no longer have to fight with other parts of the firm for resources. It’s not an exact science, but the thinking is this will add up to better performance.
Disparate units can also appeal to different investors, bolstering their valuations. Although Kellogg’s portfolio isn’t as diverse as some traditional conglomerates, as it is all centered around food, there are subtle differences.
For example, the international snacking business is growing revenue at a faster pace than the North American cereals arm. Becoming a standalone shop could generate significant value if it can continue this trajectory and achieve a valuation closer to that of rival Mondelez International Inc, which trades on an enterprise value to Ebitda ratio of 16.1 times compared with Kellogg’s 13.6 times.
The North American cereals business, which generated net sales of $2.4 billion in 2021, is more mature, with slower growth but steady cash generation. If it can bolster its profitability, as Kellogg hopes, and pay an attractive dividend, it could appeal to shareholders seeking income.
But the breakup also means three more digestible units. North
American cereals’ cash generation, which could support debt, makes it ideal for private equity. The plant-based division, which generated net sales of $340 million in 2021, could appeal to a buyout firm or another food company, such as Nestle SA, which has been building its vegan portfolio. Kellogg said it was considering a sale of the division as well as a listing.
With net sales of $11.4 billion and Ebitda of $2 billion in 2021, the global snacking arm would be a much bigger bite. But even interest in this business can’t be ruled out. After all, Haleon, soon to be demerged from GSK, received a £50 billion bid approach from rival Unilever late last year.
A similar outcome would really would mean some M&A snap, crackle and pop for the Rice Krispies maker.