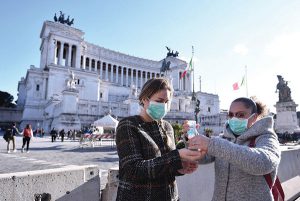 Italy’s government is working on a spending package that won’t require revising its budget to expand the deficit.
The measures could be announced as early as next week and would bring targeted relief to sectors hit by the surge in Covid-19 infections, such as tourism, the people said, asking not to be named discussing confidential plans. The package will also be used to refinance furlough programs for workers hit by the pandemic.
To fund the plans, Prime Minister Mario Draghi’s government is leaning toward srelying on existing resources, currently estimated at around $2.3 billion, without asking parliament to authorise fresh borrowing, the people said.
That would put Draghi at odds with the some of the parties in his fractious coalition which have been pushing for more spending. League leader Matteo Salvini on Wednesday called for a “sizable” expansion of deficit to shield households from higher energy bills. Salvini has been asking for about 30 billion euros of new deficit.
Measures to cushion poorer families from the impact of surging power prices, which can’t be covered by shifting
existing resources, may be introduced at a later date, potentially after the election of a new Italian president. Daily Il Messaggero reported that the cost of energy for companies will rise to 37 billion euros in 2022 from 8 billion euros in 2019.
The extra spending — including energy support — could amount to as much as 20 billion euros, La Stampa
reported earlier this month.
Spokespeople for Draghi’s office and the finance ministry declined to comment.
Italy’s government is entering a delicate phase as lawmakers prepare to elect a new president from January 24. Draghi himself is considered a leading candidate for the post, and this is seen as weakening his position with the parties backing his premiership.