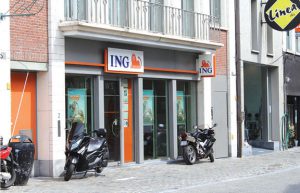 ING Groep NV will take an unspecified fourth-quarter charge to exit French retail banking, its latest move to pull out of non-core European markets.
The Amsterdam-based lender has reached a deal with local unions on a social plan for 460 employees, according to a statement. The bank, which is waiting for approval of its plan by the French Ministry of Labour, will continue its wholesale banking activities in France.
“We continuously evaluate our activities, including assessing whether they are likely to achieve the preferred scale in their market within a reasonable time frame,” said Aris Bogdaneris, management board member in charge of retail banking and what ING calls challengers and growth markets.
It’s the lender’s latest move to reduce its footprint in European retail banking. Earlier this year, ING entered into talks with the Austrian Post to sell its Austrian private customer business. It is also set to leave the Czech market by year-end, giving its local clients the possibility to move to Raiffeisenbank with preferential conditions.
ING’s exit from France comes a few months after HSBC threw in the towel, selling its local retail bank to Cerberus-owned My Money Group. The series of exits shows the struggle for foreign lenders to penetrate and remain competitive in the French market, as low interest rate have dented their profitability over the last decade.
ING is looking to sell its retail bank client portfolio in France to a third party, in order to ensure that customers will be provided with all the banking services, according to the release.
Discussions with potential buyers are still ongoing.