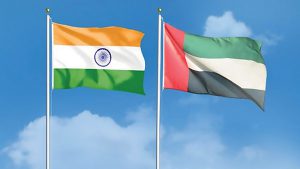 Celebrating the special economic relations between India and the UAE, Dubai Chambers on Tuesday hosted the India-UAE Partnership Summit at its headquarters in Dubai.
Hon. Piyush Goyal, Minister of Commerce and Industry, Government of India, inaugurated the summit with an opening keynote where he highlighted that the UAE-India Comprehensive Economic Partnership Agreement (CEPA) has given a natural boost to key sectors such as food and agriculture products as well as gems and jewelry.
“India and the UAE are both pursuing dynamic trade and investment policies. India hopes to see its exports touch $1 trillion in the near to medium term. Our growing bilateral trade will play an integral role in the UAE’s efforts to double the size of its economy by 2030. The destinies of the UAE and India have been inextricably intertwined for centuries. A closer collaboration, trust and the spirit of entrepreneurship will create limitless opportunities for our economies, our industries, our cities, and our people, now and for generations to come. This is the vision that CEPA aims to turn into reality.” Hon. Goyal said.
He also highlighted the various cooperation prospects which include the rupee-dirham trade, the virtual trade corridor, the food corridor and leveraging UAE and India’s startup ecosystems. Sectors such as textiles, green energy (wind, solar and hydro), connectivity infrastructure (airports, ports and roads) as well as waste management, were also amongst the areas of opportunity for both countries.
During his keynote address, Mohammad Ali Rashid Lootah, President and CEO of Dubai Chambers, revealed that the number of new Indian companies that joined Dubai Chamber of Commerce in 2022 exceeded 11,000, bringing the total number of Indian companies registered with the Chamber to more than 83,000. This reflects the strength of economic, investment and trade links between the two countries and the importance of economic partnerships in promoting future bilateral relations.
Lootah pointed out that the international office of Dubai International Chamber, one of the three chambers operating under the Dubai Chambers, in Mumbai plays an important role in developing mutual relations and attracting more Indian start-ups and SMEs to the emirate.
He confirmed that this year will see expansion in the Chamber’s Mumbai office activities to keep pace with the growing momentum in bilateral relations.
He added, “Our international offices, including our office in India, work in line with the Dubai Global initiative announced by HH Sheikh Hamdan bin Mohammed bin Rashid Al Maktoum, Crown Prince of Dubai and Chairman of Dubai Executive Council, to cement the emirate’s position as a business and investment hub that attracts international investment and supports the expansion of local businesses to overseas markets.”
Organised by the International Business Linkage Forum (IBLF) in partnership with Dubai International Chamber – one of the three chambers operating under Dubai Chambers – the summit highlights the two nations’ bilateral relations with a focus on opportunities in manufacturing and start-ups, agritech and food processing, the future of health, and fintech and investment.
Dubai International Chamber seeks to attract multinational companies based in India and expand the Dubai’s trade ties with the India market.
Through the IBLF exclusive network of prominent personalities globally, the Summit offers the chance to explore synergies, growth areas and sectors where both nations might work together for mutual benefit.
As both economies predict strong growth in 2023, the Summit calls for exploring opportunities in new sectors, moving away from the current trading patterns to new areas, reflecting both nations’ desire to develop significant digital economies and ignite greater innovation.
Rajiv Podar, Chairman IBLF, said, “The bilateral trade is all set to touch US$88 billion in 2022-23. Traditionally food and energy securities has been the prime focus between the UAE and India, however CEPA focuses also on the SME sector opening a flood of opportunities across the sectors.”
Dinesh Joshi, President IBLF and Chairman of SatyaGiri Group of Companies, stated, “The visionary leadership of India and the UAE has reinforced our existing relations which will have a long-lasting impact in the coming times. The signing of the CEPA in 88 days shows the commitment from both nations. The India UAE Partnership Summit aims to bring the stakeholders from both sides to develop strong synergies.”
The CEPA Agreement signed in 2022 by the UAE and India will increase trade exchange by 120 percent, from US$45 billion to US$100 billion and services trade to US$15 billion in the next five years.
The summit features keynote speakers including Sunjay Sudhir, Ambassador of India to the UAE, and a host of international panelists and business leaders – enabling a broader, global view – including Essa Abdulla Al Ghurair, Chairman of Essa Al Ghurair Investment; Dr. Ahmed Abdul Rahman Al Banna, Former Ambassador of the UAE to India.
Speakers called for the development of economic partnerships that underpin the ambitious development visions of the two countries and economic growth objectives.
Discussions focused on opportunities in the manufacturing sectors, emerging enterprises, agro-industries, food and financial technologies.
While petroleum products and jewellery remain the most exported goods from India to Dubai, the Summit serves to underline India’s growing expertise – as one of the world’s biggest economies – in several fields, including cutting-edge technological innovations, healthcare and finance.
The summit is designed to foster stronger understanding and better links between the two nations, as Dubai looks to enhance its reputation as a global business hub.
Also underpinning its commitment to growing trade and easing business links with India, Dubai International Chamber opened a representative office in Mumbai five years ago to help the flow of trade and services in both directions. Through such offices, the Chamber is able to strengthen partnerships with global corporations, investors and entrepreneurs and boost Dubai’s status as a major trading hub.
More than 30 percent of the start-up community in Dubai is represented by Indians, while Indian companies and NRI-owned entities have generated around 1 million jobs in the UAE.