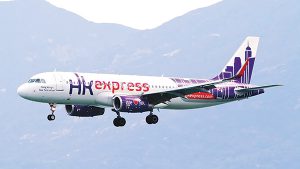 Travellers looking to leave Hong Kong after two-and-a-half years of Covid isolation face the prospect of paying sky-high airfares after the government said it will scrap hotel quarantine on September 26.
Weeks after Cathay Pacific Airways Ltd, bruised by the city’s strict pandemic strategy, pleaded publicly for a roadmap to exit Covid, the Asian financial hub’s about-turn on hotel quarantine is set to leave airlines rushing to fill a yawning gap in reduced flight schedules.
Hong Kong Chief Executive John Lee announced an end to hotel quarantine at a press conference, a decision Bloomberg News reported earlier. The government will also ditch a requirement that travellers get a negative PCR test before boarding a plane to Hong Kong.
Cathay, which supplies about 45% of plane seats in and out
of Hong Kong, has previously warned it could only increase flights to one-third of pre-Covid levels by the end of the year, hobbled by a lack of aircraft and the need to train new pilots and staff. Foreign carriers have gutted schedules or stopped flying to the city altogether.
In the first eight months of this year, Hong Kong International Airport handled just 3.4% of passengers that it did before Covid, and 30% of flights.
Travellers face paying significantly higher prices for available tickets. They’ll need
to stump up HK$102,000 ($13,000) for a return business-class flight to Los Angeles early next month, more than double the usual fare. A return economy-class seat to London departing on October 3 will cost HK$25,600, as much as triple regular prices.
“Demand and supply face a huge imbalance, but once we know there is a clear timeline and a roadmap, airlines will assess their own decisions and commercial judgments,” said Yolanda Yu, vice-chair of the Board of Airline Representatives of Hong Kong, which represents more than 70 carriers flying in and out of the city.
“Whether Hong Kong is viable to increase capacity is yet to be seen,” Yu said. Typically
it takes airlines six to nine months to organise flight schedules, she said.
Cathay welcomed the news, saying it would boost sentiment for travel. The airline plans to add more than 200 pairs of regional and long-haul passenger flights in October, with daily flights to Tokyo’s Haneda Airport resuming in November.
“We are fully committed to rebuilding the connectivity of the Hong Kong aviation hub,” the airline said in a statement. “While we will continue to add back more flights as quickly as is feasible, it will take time to rebuild our capacity gradually.”
The International Air Transport Association (IATA) said Hong Kong’s next step should be to remove all Covid-19 measures, including the three days medical surveillance and PCR testing on arrival.
“The entire aviation value chain in Hong Kong needs to be prepared for a surge in travel from pent up demand, similar to what we have seen in other markets as soon as quarantine measures are lifted,” said Xie Xingquan, IATA’s North Asia regional vice president.
Foreign airlines face the challenge of airport restrictions and a shortage of aircraft and staff in restarting Hong Kong flights. Carriers could be reluctant to restart services when other parts of the world are more profitable. And operationally, airlines particularly flying between Europe and Asia face longer routing with Russian airspace closed to most carriers.
British Airways Plc plans to resume flights to Hong Kong
in December, but Australia’s Qantas Airways Ltd recently pushed back the restart of Hong Kong flights until late January 2023. Virgin Atlantic Airways Ltd won’t return until March next year.
United Airlines Holdings Inc, the only US carrier with Hong Kong flights, is yet to decide on resuming services. ANA Holdings Inc said it would restart services to the city from Tokyo Haneda airport from the end of October, flying four times a week.
Corporate travel manager CWT said the amount companies are set to pay for flights out of Hong Kong will continue to rise. From pre-pandemic levels to next year, airfares will have climbed 53%.

Cathay Pacific Airways Ltd’s website and that of its low-cost unit buckled under a rush of flight searches as
the Hong Kong government announced that mandatory quarantine and other pandemic travel restrictions will be scrapped next week.
“We are currently experiencing high traffic on our website,” Cathay said. “We have set up a virtual waiting room to better manage customer traffic to our site. You are in a queue at the moment, but you’ll be put through soon.”
The airline advised visitors to keep the web page open and said they would have 30 minutes to book a ticket after entering the site.
Travel agency Trip.com said as of 2.30 pm on Friday, flight searches surged 95 times from the same time last week and bookings jumped 50% on its website. Tokyo and Bangkok led with jumps of 650% and 200%.
Cathay’s budget unit HK Express was also inundated with flight searches as wannabe travelers rushed to take advantage of the easing of pandemic travel restrictions across parts of Asia.