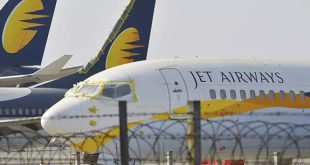 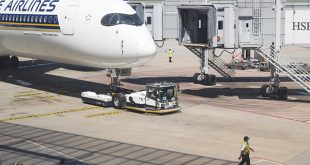 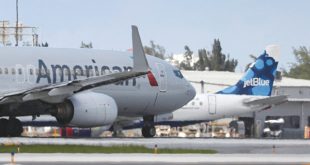 Gol Linhas Aereas Inteligentes SA reported a fourth-quarter loss and predicted business would worsen this year in the face of declining demand and a shrinking Brazilian economy.
The net loss was 1.18 billion reais ($324 million), the airline said in a statement after the close of trading in Sao Paulo. Fourth-quarter net revenue totaled 2.65 billion reais against analyst estimates of 2.66 billion reais.
Brazil’s largest carrier by market share said the results reflect the nation’s economic scenario, and forecast its takeoffs and total seats would both drop by 15 percent to 18 percent this year. Gol, like its peers, has been hit by a 3.8 percent contraction in Brazil’s economy and 33 percent drop in the country’s currency against the US dollar last year. Airlines have been particularly hurt by weak demand among business travelers, who typically generate the most-profitable fares.
Moody’s Investors Service last month downgraded Gol to Caa1, seven levels below investment grade, saying the company has an unsustainable capital structure and insufficient liquidity to support its operations. Fitch Ratings also downgraded the company last month and said Gol is at risk of default in the next 12 to 24 months.

Net Debt
Gol had cash of 2.3 billion reais at the end of December, equivalent to 23.5 percent of annual net revenue, and net debt of 7 billion reais, the company said. The airline on Monday said it had hired US-based investment bank PJT Partners Inc. in part for advice on strengthening the airline’s debt profile.
The airline’s domestic demand as measured by revenue per kilometer dropped 8.3 percent in the fourth quarter. Domestic capacity, or available seats per kilometer, fell 3.7 percent. Brazilian carriers are expected to cut domestic capacity 7 percent this year, according to industry group Abear.
Gol has said it’s attempting to reduce capacity, postpone the planned addition of some jets to its fleet and renegotiate aircraft leases and other contracts.
GoI is a Brazilian airline based São Paulo, Brazil. The company is the largest low-cost airline in South America and the second largest Brazilian airline company by market share and fleet size, after TAM Airlines, a subsidiary of Latam Airlines. Gol competes in Brazil and other South American countries with Chilean LATAM Airlines Group, Brazilian Azul and Colombia-based Avianca Holdings SA.
It also owns the brand Varig, although now that name refers to what is informally known as the “new” Varig, founded in 2006, not to the extinct “old” Varig airline, founded in 1927.
According to the National Civil Aviation Agency of Brazil (ANAC), between January and December 2014 Gol/Varig had 36.1 percent of the domestic and 15.71 percent of the international market shares in terms of passengers per kilometer flown,[2]making it the second largest airline in Brazil, after TAM.
.