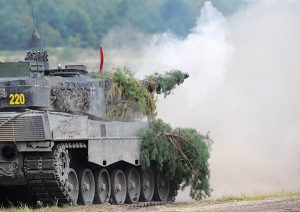 Germany pledged to supply Ukraine with more than 100 Leopard 2 battle tanks in a joint effort with allies, providing Kyiv’s forces with a significant upgrade in firepower and earning effusive praise from President Volodymyr Zelenskiy.
In a first step, Germany will make a company of 14 Leopard 2 A6 tanks available from stocks held by its armed forces, Chancellor Olaf Scholz’s government said Wednesday in an emailed statement. Defense Minister Boris Pistorius told reporters in Berlin that the first German tanks could arrive in Ukraine within three months, possibly too late to counter a Russian offensive that defense officials have warned could come as soon as next month.
The eventual goal is for Germany and its partners to supply two battalions totaling 112 Leopards and the government in Berlin will give allies the required authorization to supply their tanks, according to the statement. The package includes training in Germany for Ukrainian troops, logistics, ammunition and maintenance.
“We are talking here about very effective weapons systems,” Scholz said in a statement to the lower house of parliament, in which he also defended his policy of not acting unilaterally but in concert with European and Nato partners.
“It was right and it is right that we did not allow ourselves to be pushed but chose, and will continue to choose, this close cooperation,” Scholz told lawmakers.
Scholz and Zelenskiy discussed the tanks plan in a call Wednesday. The Ukrainian leader also published a tweet in which he praised what he said were “important and timely decisions” and said he was “sincerely grateful” to Scholz and Germany.
The Biden administration is expected to join the tanks alliance and announce as soon as Wednesday that it will offer Ukraine its main battle tank, the M1 Abrams. The move would signal Washington had dropped its resistance, which it justified by arguing that the vehicle consumes too much fuel and is difficult to operate.
The German decision to ship the Leopards is the latest step in a radical overhaul of German defense policy triggered by Russia’s full-scale invasion of Ukraine 11 months ago. Until then, Germany refused to send weapons to conflict zones and had allowed its armed forces to deteriorate during decades of underinvestment.
Immediately after the invasion, Scholz announced the creation of a special fund worth €100 billion ($109 billion) on top of the regular defense budget and said Germany would lift military spending to meet a Nato goal of 2% of gross domestic product.