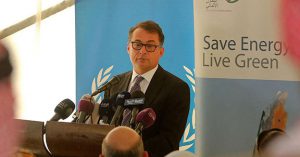 Germany’s new coalition government picked Joachim Nagel, a former Bundesbank senior official, as the central bank’s next chief, touting his ability to help tackle soaring inflation.
Nagel, 55, will succeed Jens Weidmann, who leaves at the end of the year. The choice of a veteran for the top job suggests there’ll be no major policy changes at an institution hallowed within Germany for its role in reasserting price stability during the second half of the 20th century.
“Considering the risk of inflation, stability-oriented monetary policy is of increasing significance,” Finance Minister Christian Lindner said in a tweet. “This is an experienced personality who will ensure continuity at the Bundesbank.”
An economist seen as close to Chancellor Olaf Scholz’s Social Democrats, Nagel served six years on the Bundesbank’s board before moving to state-owned development bank KfW Bank. He’s currently deputy head of the banking department at the Bank for International Settlements.
Nagel is rejoining Germany’s central bank at a critical time. A new government has taken office after months of political vacuum, inflation has just hit 6% and a new wave of coronavirus infections is threatening the economy.
That backdrop has put both Scholz and Finance Minister Christian Lindner of the Free Democrats in the spotlight. Lindner has repeatedly expressed concern at inflation and also says he’s wary at the possibility of fiscal dominance in the euro area.
The choice of Nagel means Germany will miss an opportunity to pick its first-ever female central bank chief, despite potential candidates ranging from Isabel Schnabel, a top European Central Bank policy maker, to the current Bundesbank vice president, Claudia Buch.