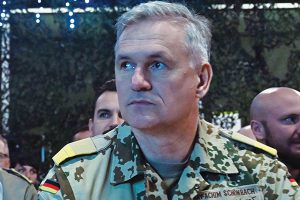 Germany’s top naval officer resigned after comments he made about Russia, including a call to show respect toward President Vladimir Putin, caused a diplomatic incident.
Ukraine summoned the German ambassador in Kyiv earlier Saturday to protest the remarks by Navy Inspector Kay-Achim Schoenbach, who also said Crimea would never return to Ukraine after its annexation by Russia in 2014.
“My position is increasingly burdened by the ill-advised comments on security and military policy that I made in India,” Schoenbach said in a statement released by the German navy. Defense Minister Christine Lambrecht has accepted his resignation, he said.
The comments, recorded this week during a talk by Schoenbach at a New Delhi-based think tank, created an awkward diversion as the US and Europe respond to the Ukraine standoff after Putin massed an estimated 100,000 troops on the border.
The latest US-Russian talks ended inconclusively this week. Aides to the Ukrainian, Russian, German and French leaders will probably meet on Wednesday in Paris, Mykhailo Podolyak, an adviser to the Ukrainian president’s chief of staff, said by text message.
In the video, Schoenbach suggested Putin’s underlying goal was to win affirmation for Russia as a major power.
“It is easy to even give him the respect he really demands and probably also deserves,” Schoenbach said. He also cast doubt on Ukraine’s aspirations of NATO membership, which the US and its allies want to maintain as an option, over Russian objections.
“Is it smart to have them as a member? No, it’s not,” he said.
German Chancellor Olaf Scholz on Friday signaled reluctance to participate in any effort to arm Ukraine, saying his country’s policy is to refrain from exporting “lethal weapons.”