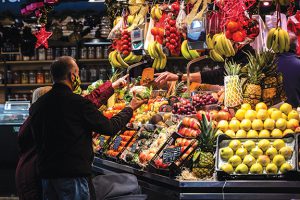 The Group of Seven (G-7) finance ministers will convene virtually on Monday to discuss the recent surge in inflation, according to people with knowledge of the matter.
The talks will come against the backdrop of supply-chain snarls that have hampered the world economy, and ministers will also discuss healthcare, according to the people,
who spoke on condition of anonymity.
The meeting shows how, two years into the pandemic, the focus of global economic coordination has shifted from protecting jobs to finding solutions to contain inflationary pressures that threaten to squeeze income.
The virtual discussion reflects the depth of concern inside the US and other large economies for what has
become a major political challenge bedevilling governments and policy makers. The problem for the G-7 is that it’s unclear what they can do.
“There’s not much governments can do to impose a solution,” said Stephen Stanley, chief economist at Amherst Pierpont Securities LLC. “The most urgent task for public officials is to show they’re concerned for their citizens’ welfare and at least look like they’re trying to do something.”
Ahead of the G-7 call, Treasury Secretary Janet Yellen spoke with Germany’s newly appointed finance minister, Christian Lindner. Germany is set to rotate into leadership of the G-7 in the coming year.
Yellen shared with Lindner President Joe Biden’s “concern over Russia’s escalation of armed forces surrounding Ukraine, and expressed her interest in partnering with Germany on contingencies that could be rapidly deployed to impose severe costs on Russia’s economy.”
News of the G-7’s planned talks on Monday came shortly after new data showed US consumer prices rose at the fastest annual pace in nearly 40 years, increasing pressure on the Federal Reserve to tighten monetary policy.
Inflation in the euro area and the UK is also surging, driven by energy prices, labour shortages and the fraying of global supply-chains.