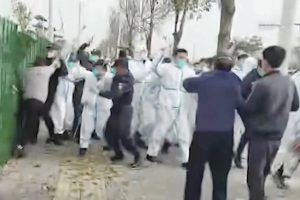 Foxconn Technology Group has begun offering 10,000 yuan ($1,400) to any workers who choose to leave, an unusual decision intended to appease disgruntled new hires who played a central role in violent protests that rocked the world’s largest iPhone factory.
Apple Inc.’s main global production partner said in an online notice the sum, to be paid out in two installments, will help smooth the journey home for employees. Many of the 200,000-plus workers at Foxconn’s main plant in Zhengzhou hail from elsewhere in the province or country. But the intent was also to usher out recent employees that the local government helped recruit, many of whom fueled tensions among the ranks. The company will replace departing staff, though it may take time.
The payout, which in general exceeds a month’s wages for Foxconn’s blue-collar staff, is likely to placate some employees who on Wednesday staged a rare violent protest that trained a spotlight on the economic and social toll of Xi Jinping’s Covid Zero strategy. Hundreds of workers clashed with security personnel in the early hours as tensions boiled over after almost a month under tough restrictions intended to quash a Covid outbreak.
One factor behind the unrest is that workers found out they wouldn’t receive higher wages they had been promised unless they stayed at the factory through March. The 10,000 yuan payment would compensate people unhappy with that restriction for their travel back home. A computer glitch also didn’t help. Foxconn apologized Thursday for an “input error” that may have made it seem like some staff were paid less than promised, adding it would stand by contractual obligations.
Mounting dissatisfaction among Foxconn’s ranks threatens to further disrupt production at a plant that cranks out the majority of Apple’s marquee devices for shipment around the world. The US company has already warned it will ship fewer devices than anticipated during the critical holiday quarter, while wait times for iPhones have ballooned in some cases to after Christmas.
“We have Apple team members on the ground at our supplier Foxconn’s Zhengzhou facility,” the US company said in a statement. “We are reviewing the situation and working closely with Foxconn to ensure their employees’ concerns are addressed.”
Workers streamed out of dormitories in the early hours of Wednesday, jostling and pushing past the white-clad guards they vastly outnumbered. Several white-suited people pummeled a person lying on the ground with sticks in another clip. Onlookers yelled “fight, fight!” as throngs of people forced their way past barricades. At one point, several surrounded an occupied police car and began rocking the vehicle while screaming incoherently.
The protest started overnight over unpaid wages and fears of spreading infection. Several workers were injured and anti-riot police arrived on the scene to restore order.
The plant had resumed normal operations by Wednesday evening, Foxconn said.