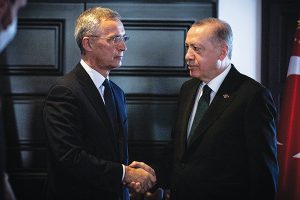 The leaders of Finland and Sweden are set to meet with Turkish President Recep Tayyip Erdogan on Tuesday in a bid to convince him to drop the objections to their membership in Nato.
Finland’s President Sauli Niinisto and Swedish Prime Minister Magdalena Andersson are slated to meet Erdogan in Madrid, alongside Jens Stoltenberg, the secretary general of the North Atlantic Treaty Organization, Niinisto’s office said on Twitter on Monday. Their meeting is preceded by a round of talks hosted by Nato in Brussels, including a bilateral encounter by Stoltenberg and Andersson.
Tomorrow’s talks will take place as Nato kicks off a summit in Madrid, at which Finland and Sweden will also be present as alliance partners. The summit provides an “opportunity we should seize” to make progress on the membership bids, Stoltenberg told reporters on Monday.
Finland and Sweden applied to join Nato in May following Russia’s attack on Ukraine, only to have their accession immediately stalled by Erdogan, who is demanding they do more to clamp down on Kurdish groups it views as terrorists. Allowing sales of weapons is another key demand by Erdogan.
Turkey has power to veto the accession of the two Nordic countries, as a sign-off is needed by all 30 member countries of the alliance. Ankara has chosen to stop the two from even starting talks on the terms of their entry.
The Madrid summit will decide on a strategic direction for the alliance. While all sides have insisted the summit is not a deadline to resolve the conflict with Turkey, pressure is building to prevent the situation from becoming deadlocked.
Stoltenberg declined to speculate about what would be achieved at forthcoming meetings, or to provide a specific deadline. “The only thing I can promise is we’re working as hard as we can and as intensively as we are able to find a solution as soon as possible,” Stoltenberg said.
“The longer the situation remains unresolved, the more the alliance’s united front begins to fray,” Iro Sarkka, a Nato expert at the University of Helsinki, said in an interview. “Nato’s active role is needed to resolve the situation, to bring the parties to the same table.”
“We don’t know what’s happening behind the scenes, but it seems it’s a conscious choice to make it appear as though these three countries are the ones negotiating, and diffuse the role of the US,” she said. “But in the end, that’s where the solution is likely to come from — the US stepping in to make a deal with Turkey to resolve the issue.”
Turkey is a key member of Nato, with the second-largest army in the bloc after the US in terms of numbers and a strategic position between the Europe and the Middle East. It wants the Nordic nations to make written commitments to crack down not only on supporters of the Kurdish PKK militant group —already designated a terrorist organization by the EU and the US — but also on its affiliates, such as the so-called YPG militia in Syria. Backed by western nations, the YPG played a significant role in defeating IS extremists in Syria. Turkey accuses the group of attacking its soldiers near the countries’ border.