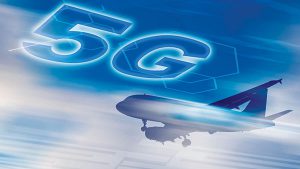 US aviation regulators expanded their warning about 5G service set to launch January 5 on new frequencies, saying potential interference could have a broad impact on aircraft safety systems.
The Federal Aviation Administration issued a Safety Alert for Operators warning that “a wide range” of aircraft safety devices could malfunction and laid out the process it will follow in coming days to potentially issue specific restrictions on flights.
The FAA actions come as telecommunications and aviation companies agreed to share more data in an attempt to head off what has become a tense standoff over whether the 5G service could disrupt airlines and helicopter operations.
“The FAA is working with the aviation and wireless industries to find a solution that allows 5G C-band and aviation to safely coexist,” the agency said in a statement that accompanied the release of the alert and a Special Airworthiness Information Bulletin.
In the alert, the FAA identified 17 different safety systems and aircraft functions that could fail if 5G airwaves interfere with radar altimeters, which use radio waves to calculate an aircraft’s altitude.
As talks with the telecommunications industry are underway, the FAA is preparing what are known as Notices to Air Missions that may restrict flights in dozens of locations, it said.
The wireless industry and the Federal Communications Commission have said the new high-speed wireless service on the so-called C-band of spectrum don’t pose a threat, but the FAA and airlines are warning that there could be flight disruptions including delays and the diverting of planes to different airports.
C-band airwaves are near the frequencies used by altimeters.
“We share the FAA and FCC’s confidence that we can and will have safe flights and robust and reliable 5G,” Nick Ludlum, a spokesman for the CTIA telecommunications trade group, said in an email. “We continue to work closely with the aviation industry and we look forward to joining the nearly 40 countries already operating 5G in the C-band on January 5th.”
A radar altimeter’s data is fed into numerous systems on aircraft, from basic help to pilots during landing to multiple safety devices, according to the FAA. Its data is used to prevent crashes into the ground and mid-air collisions, for example. But it also feeds aircraft automation that control throttle settings, takeoff guidance, windshear alerts and thrust reversers that help stop after landing.
“Anomalous (missing or erroneous) radio altimeter inputs could cause these other systems to operate in an unexpected way during any phase of flight – most critically during takeoff, approach, and landing phases,” the FAA said in the safety alert.