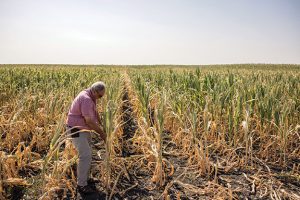 Searing temperatures are shriveling corn crops across Europe, in the latest sign of a deepening crisis that spans everything from Rhine River transport to Spanish olive growers.
Sown in the spring, corn is under stress due to a lack of rain as the region struggles with rolling heat waves. Three-quarters of Romania, Europe’s biggest producer, is affected by drought of varying severity, while major grower France had its driest July on record. Farmers in parts of eastern Germany could lose their entire crop.
“Last weekend, I saw fields where the corn was just above my knees,” said Helmut Messner of the German corn grower committee. “It’s partially already brown, so there is no photosynthesis, because the leaves are already dead. Usually at this time of year it’s 2.5 to 3 meters tall.”
Europe’s corn fields are the latest casualties of weeks of dry, hot weather that has also sharply reduced water flows in key rivers, such as the Rhine, Rhone, Danube and Po. That’s crippling both irrigation and navigation, curbing coal transport and French nuclear output just as Europe tries to cut its
dependence on Russian gas.
Moscow’s invasion has also throttled shipments of corn from Ukraine as the intense summer heat curbs the European Union’s own crop. While corn prices pared last week’s almost 10% gain as the first cargo of grain left the port of Odesa, they remain far higher than is usual for this time of the year.
The European Union has cut its forecast for this season’s corn harvest to 65.8 million tons, which would be the smallest since 2018-19. That could be revised down further as conditions deteriorate in France and other countries.
Drought is also impacting Ukraine, with the Odesa and Vynnytsia regions harvesting less than expected.
“This season was certainly one where European corn was going to be of increased importance to plug the supply gap being left by Ukraine,” said Peter Collier, senior market adviser at UK-based CRM AgriCommodities. “But with EU corn suffering, and production estimates being cut, grain supply is being further stretched.”
Drought is also impacting Ukraine, with the Odesa and Vynnytsia regions harvesting less than expected, according to the country’s agrarian council.
Some farmers have had enough. In the face of drought conditions that started four years ago, Mihai Anghel hasn’t planted any corn for the first time in 25 years. The owner of Romania’s Cerealcom Group has instead replaced corn with sunflowers, which are more drought-resistant.
“I was aware of the profound soil-water deficit,” he said. “It’s the most persistent drought in the last 20 years, as far as I can remember.”
In Hungary, lack of rainfall has caused the Danube’s water level to drop significantly and the harvest is set to be the worst since at least 2010.
The drought is also impacting other industries. In Germany, the Rhine is so low that utilities and chemicals sectors are struggling to transport materials by river from the North Sea to factories upstream. They’re having to turn to more expensive forms of transport like rail and road.