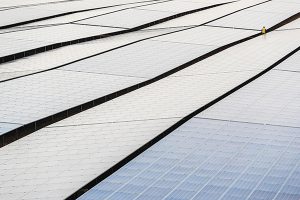 Emirates Global Aluminium (EGA) purchased Clean Energy Certificates for 1.1 million megawatt hours of electricity supplied by Emirates Water and Electricity Company (Ewec), supporting EGA’s production of CelestiAL solar aluminium.
The certificates track the use of solar power from Noor Abu Dhabi, one of the world’s largest single-site solar power plants. Noor Abu Dhabi is located at Sweihan, with 3.2 million solar panels generating approximately one gigawatt of electricity.
The transaction is the largest acquisition to date of Clean Energy Certificates that track the use of solar power in Abu Dhabi and will certify EGA’s production of around 80,000 tonnes of CelestiAL. The volume of CelestiAL EGA produces each year depends on solar power imports from the electricity grid.
The generation of the electricity required for aluminium production accounts for approximately 60% of the global aluminium industry’s greenhouse gas emissions. The use of solar power by EGA significantly reduces these emissions in line with the UAE’s Net Zero by 2050 Strategic Initiative.
Abdulnasser bin Kalban, CEO of EGA, said, “This agreement provides EGA with a new source of certified solar power for production of our CelestiAL solar aluminium. I thank Ewec for their partnership and leadership in developing solar power in Abu Dhabi.”
“The launch of CelestiAL solar aluminium last year was a landmark for EGA and our industry. CelestiAL and other low carbon metal is key to our sustainable future – both for our company and our world.”
Othman Al Ali, Chief Executive Officer of Ewec, said, “Ewec is actively pursuing an ambitious energy transition plan, developing record-size solar power generation capacities to serve our current and future partners. We are proud of our strategic partnership with EGA to support the decarbonisation of their industry in line with the UAE Net Zero by 2050 Strategic Initiative objectives. We look forward to our continued collaboration with EGA and together playing a key role in the realisation of the UAE’s economic and sustainability agenda.”
Clean Energy Certificates are issued by the Abu Dhabi Department of Energy and conform to International Renewable Energy Certificate standards and best practices. Ewec is one of the key parties enabling the implementation of the scheme and operates auctions selling certificates for both solar and nuclear-generated electricity in Abu Dhabi.
Clean Energy Certificates are the only accredited method in Abu Dhabi to prove ownership of the environmental and economic benefits achieved by using renewable and clean energy.
EGA currently exchanges limited amounts of power with the grid to optimise power generation efficiency. Earlier in 2022, EGA announced a strategic initiative with Taqa, Dubal Holding and Ewec to divest its natural gas-fired power assets and instead source all its electricity from the grid, including an increasing proportion of clean energy.
The initiative would unlock significant further development of solar power within EWEC’s fleet, allowing power asset and grid optimisations, and enabling EGA to vastly increase its import of solar power and, therefore production of CelestiAL.
EGA became the first company in the world to produce aluminium using solar power in 2021 through an agreement with Dubai Electricity & Water Authority. EGA produced almost 39 thousand tonnes of CelestiAL last year. EGA’s customers for the metal include BMW Group and Hammerer Aluminum Industries, a tier 1 supplier of Mercedes-Benz.