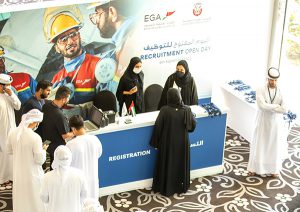 Emirates Global Aluminium (EGA) continued its collaboration with Abu Dhabi’s Human Resources Authority (HRA) by holding a recruitment drive in Abu Dhabi to attract young UAE nationals.
More than 50 UAE nationals were shortlisted for places on EGA’s long-running National Training Programmes, following interviews with EGA representatives at the recruitment drive. Successful candidates will undergo intensive training at EGA, beginning in November 2022 and lasting anywhere between six months to three years, dependant on their technical role.
Successful candidates will be offered contracts prior to beginning training at EGA’s technical training centre, which provides programmes certified by the Knowledge and Human Development Authority (KHDA) and Abu Dhabi Centre for Technical and Vocational Training. Following their time at the training centre, candidates will receive further practical training on-site at EGA prior to being offered operational roles at EGA’s smelters and power plants.
Abdulnasser bin Kalban, Chief Executive Officer at EGA, commented, “EGA is committed to recruiting and developing UAE Nationals as an investment in our future. We are pleased to be working with Abu Dhabi’s HRA to identify qualified candidates for our National Training Programmes and I look forward welcoming the new batch of young, talented Emiratis to our company.”
Iman Al Qasim, Executive Vice President of Human Capital at EGA, said, “At EGA, we are driven by our bold aspiration to become a talent-driven organisation and the leading industrial employer of choice in the countries where we operate by 2030. I was delighted to see over 400 candidates attend the recruitment drive. I look forward to welcoming successful candidates to EGA and to supporting them on their professional pathways as they advance their careers.”
Last year, EGA recruited more than 100 UAE Nationals, 73 of whom participated in foundational training programmes, including the National Training Smelter programme, developed in collaboration with and sponsored by the Abu Dhabi Human Resources Authority.
EGA’s National Training programmes develop young UAE Nationals for operational roles at EGA. More than 5,000 UAE Nationals have graduated from the programmes since they were first established in 1982, and many have gone on to pursue long and successful careers at EGA.
Almost 1,200 UAE nationals now work at EGA. Over 700 of EGA’s Emirati employees are under the age of 35.
At the end of 2021, EGA’s in-focus Emiratisation rate was around 40 percent. When considering the high number of blue-collar positions in heavy industry, EGA has one of the highest Emiratisation rates of any major company.