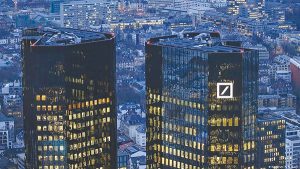 The European Central Bank (ECB) is imposing higher capital requirements on lenders including BNP Paribas SA and Deutsche Bank AG, arguing that they have ignored warnings to cut risk in the lucrative business of leveraged finance, according to people familiar with the matter.
The French and German investment banks are among a handful of institutions who are active in the business and are facing tougher demands from the ECB, according to the people, who asked to remain anonymous as the matter is private.
The charges for the leveraged finance business are intended to be sufficient to gain the attention of management while not having a major effect on overall requirements, said the people. The banks already exceed their respective capital bars by a wide margin.
In recent years a number of European lenders piled into extending credit to highly indebted borrowers, often the subject of private equity takeovers, as they sought to compete with US firms in an area that can be highly profitable and help them win other business. That prompted ECB concerns as far back as 2017, and the rising level of risk has set the industry on course for a showdown with the regulator.
Those concerns are playing out this year, as global banks racked up more than $2.4 billion of mark-to-market losses on leveraged finance over the past two quarters. The size of those hits fell in the third quarter at several lenders, according to Bloomberg Intelligence.
Officials for the ECB and BNP Paribas declined to comment. Deutsche Bank and BNP Paribas shares fell on the news.
A spokesman for Deutsche Bank declined to comment on interaction with regulators, while saying that the firm doesn’t expect a “material change” in its requirements for high quality capital or a “material impact on our business strategy.” The lender has slowed leveraged-finance underwriting “given the current environment,” yet it
remains committed to the
business, he said.
Andrea Enria, the ECB’s most senior banking oversight official, said earlier this month that the regulator would “have some capital add-ons” related to leveraged finance in this year’s review of the risks that individual banks face. He didn’t name any banks facing the hikes. They won’t be “huge figures, but already signaling to banks that we want to see a change,” he added.
Regulators generally raise the bar for capital to ensure banks have sufficient means to cope with potential losses. It can also deter executives from taking too much risk because tougher requirements reduce the amount of equity that can be used to support growth or be paid out via dividends and buybacks.
The ECB has repeatedly said that banks don’t grasp the perils they face in leveraged loans. ECB supervisory board member Elizabeth McCaul said in September that leveraged finance risks “are inadequately captured, understood and managed” by banks.
Deutsche Bank, which was already hit with a capital charge over leveraged loans last year, has been vocal that it takes a different view of the business. The bank’s leveraged loan portfolio stood at about €5 billion ($5.2 billion) at the end of the third quarter, and it took write-downs of about €110 million on the portfolio during the period.
BNP Paribas took also markdowns on leveraged loans in the third quarter, but they were “very small” and lower than at US peers, Chief Financial Officer Lars Machenil said on a call with analysts earlier this month. He suggested that they amounted to less than €100 million, saying “it’s written for us with two digits, whereas in many others, you’ll see three digits.”