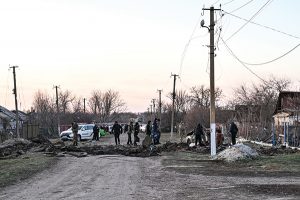 A third Russian airfield came under drone attack on Tuesday after Moscow accused Ukraine of carrying out strikes against two bases used by its long-range bombers, the deepest retaliation on its territory since President Vladimir Putin ordered the invasion.
An oil storage tank caught fire after the drone strike at a Kursk region airfield, state-run Tass news service reported, citing a Telegram post by local governor Roman Starovoyt.
The incident followed attacks on military bases in Russia’s Saratov and Ryazan regions that damaged two aircraft and killed three service personnel when drones crashed after being intercepted by air-defenses, according to the Defense Ministry in Moscow. The airfields are home to strategic aircraft
capable of carrying nuclear weapons.
Ukraine hasn’t confirmed it carried out any of the attacks. The Saratov and Ryazan regions, southeast of Moscow, are at least 500 kilometers (310 miles) from the border between the two countries, while Kursk is about 100 kilometers from Ukraine.
Russia fired air- and sea-launched missiles against energy and communications infrastructure in Ukraine after the attacks.
Putin’s military has waged a campaign of missile and drone assaults against critical infrastructure in Ukraine in recent weeks aimed at cutting power, heating and water supplies to civilians during winter, prompting an international outcry and accusations that it is committing war crimes.
At an online briefing, Ukrainian air defense spokesman Yuriy Ihnat declined to comment on any role by Ukraine in the “mysterious explosions” in Russia.
Authorities are taking “necessary measures” to safeguard against possible Ukrainian attacks on Russian territory, Kremlin spokesman Dmitry Peskov told reporters on a conference call.
The United Nations Security Council was expected to meet to discuss humanitarian issues in Ukraine at the request of “Western countries,” Russian deputy UN envoy Dmitry Polyanskiy said on Telegram. States at the meeting would also likely criticise the Russian strikes on Ukrainian infrastructure, he said.
The massive strikes are part of Russia’s plan to “crush Ukraine’s military potential,” Defense Minister Sergei Shoigu said, according to the Interfax news service.
Russia has blamed Ukraine for a series of blasts at military facilities in Crimea, which Putin annexed in 2014.

Russia’s war in Ukraine has opened a door for South Korea’s defense exports, which are on track to more than double this year as buyers seek to replace Soviet-era weaponry with higher tech arms from the Asian country.
South Korea’s defense exports totalled about $17 billion as of November this year, up from $7.25 billion a year before. Major buyers include countries that have for decades relied on stockpiles of aging Russian weaponry, like Poland, but have seen that many of those systems are no match for the weapons that arm the US and its allies.
South Korea has found itself uniquely positioned in the global arms market with weapons that are relatively affordable and meant to defeat Soviet-based conventional systems used by its neighbour North Korea.
Meanwhile, Washington seems to be giving the green light to ally Seoul to sell to states in places like Eastern Europe as US defense contractors race to fill orders for weapons that will go to Kyiv and Taipei.