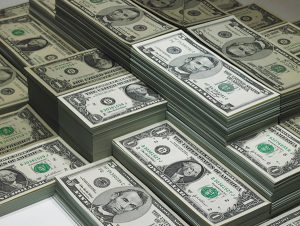 The soaring dollar is propelling the global economy deeper into a synchronised slowdown by driving up borrowing costs and stoking financial-market volatility — and there’s little respite on the horizon.
A closely watched gauge of the greenback rises 7% since January to a two-year high as the Federal Reserve embarks on an aggressive series of interest-rate increases to curb inflation and investors have bought dollars as a haven amid economic uncertainty.
A rising currency should help the Fed cool prices and support American demand for goods from abroad, but it also threatens to drive up the import prices of foreign economies, further fueling their inflation rates, and sap them of capital.
That’s especially worrying for emerging economies, which are being forced to either allow their currencies to weaken, intervene to cushion their slide, or raise their own interest rates in a bid to buttress their foreign exchange levels. Both India and Malaysia made surprise rate hikes this month. India also entered the market too to prop up its exchange rate.
“The Fed’s rapid pace of rate hikes is causing headaches for many other economies in the world, triggering portfolio outflows and currency weakness,” said Tuuli McCully, head of Asia-Pacific economics at Scotiabank.

Advanced economies haven’t been spared either: In the past week the euro hit a new five-year low, the Swiss franc weakened to hit parity with the dollar for first time since 2019 and Hong Kong’s Monetary Authority was forced to intervene to defend its currency peg. The yen also recently toughed a two-decade low.
“The Fed’s rapid pace of rate hikes is causing headaches for many other economies in the world, triggering portfolio outflows and currency weakness,” said Tuuli McCully, head of Asia-Pacific economics at Scotiabank.
While the combination of slowing US growth and an expected cooling in America’s inflation will ultimately see the dollar’s ascent slow — which in turn will take pressure off other central banks to tighten — it may take months to find that new equilibrium.
So far at least, traders are reluctant to call a peak in the dollar rally. That in part reflects bets at the end of 2021 that the greenback’s gains would fade as rate hikes were already priced in. Those views have since been shredded.
Developing economies are in danger of a “currency mismatch,” which occurs when governments, corporations or financial institutions have borrowed in US dollars and lent it out in their local currency, according to Clay Lowery, a former US Treasury assistant secretary for international affairs who’s now executive vice president at the Institute for International Finance.