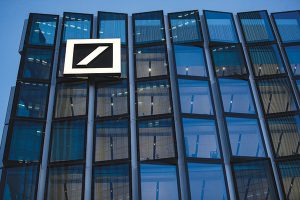 The chief executive of Deutsche Bank’s investment unit, DWS Group, said it’s time to dial back the “exuberant” language used in ESG sales pitches.
Stefan Hoops, who took over as CEO after allegations of greenwashing expedited the departure of his predecessor earlier this year, acknowledged there’s been a need to rethink how DWS markets environmental, social and governance investing opportunities.
“It is important that large asset managers remain committed to driving ESG,” he said at a press briefing on Wednesday. “And given everything that’s happened to us, we need to remain one of the flag-bearers for ESG in Europe.”
Looking back, however, “there was definitely exuberant marketing for quite some time, which should be toned down,” Hoops said.
Speaking after DWS announced financial targets that drove up its share price, Hoops said the firm’s internal investigations into alleged exaggerated ESG claims are now nearing an end. He also said he continues to “stand by” the firm’s previous ESG disclosures, as it works closely with authorities in the US and Germany to resolve the case.
The asset manager, which
is roughly 80% owned by Deutsche Bank, is being investigated by the Securities and Exchange Commission and German regulator BaFin after its former sustainability head, Desiree Fixler, accused it of misleading clients as to the extent of its ESG work.
The probes triggered a police raid earlier this year that hastened the exit of then-CEO Asoka Woehrmann. DWS has rejected allegations of greenwashing from the outset.
Hoops said he’s carefully reviewed how DWS arrived at previous ESG disclosures, including those made in the firm’s 2020 and 2021 annual reports, which were singled out by Fixler for criticism. That review gave him “confidence” that the information contained in them was accurate at the time, though he said evolving regulation meant DWS subsequently changed how it handles ESG disclosures.
Hoops isn’t alone in urging the industry to tone down its ESG talk.