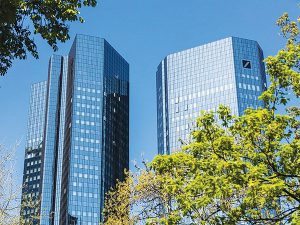 Deutsche Bank AG sees room to expand its deals business in Asia and is looking to hire selectively even as some rivals turn wary amid a sharp slowdown in China.
“As different industry players continue to be increasingly cautious, we do see opportunity to strategically grow our market share in some areas where it makes sense,” Amit Khattar, the lender’s head of investment banking for Asia-Pacific, said in an interview in Singapore.
He expects the advisory and financing businesses to drive growth in the region for the next few years until capital markets come back in full swing, which might take another year or so. The bank’s merger pipeline is fuelled largely by Southeast Asia, Korea and Australia, he said.
“We feel pretty resilient in what we do in Asia-Pacific,” said Khattar, who’s been at the Frankfurt-based firm for more than a decade.
He sees strong deals momentum in India, particularly among companies that now have good balance sheets and are “raring to go,” while Thailand and Singapore are enjoying solid activity. Environmental, social and governance is another area that will bring in more financing and capital markets business over the years, he said.
In China, the slump in equity and debt offerings has hit global banks hard, with many slashing jobs in recent months. Credit Suisse Group AG is cutting at least a third of its investment-banking workforce and about 40% of research staff in China. Morgan Stanley is planning to cut about 10% of its 500 person Asia-Pacific ex-Japan investment-banking workforce in a retrenchment.
Equity and equity-linked offerings in Asia Pacific dropped 49% this year, while dollar and euro-denominated debt issuance declined 44%, according to data compiled by Bloomberg. Deutsche Bank, the top manager for Asia ex-Japan high-yield bonds, handled only $675 million of deals in this segment, down 81% from the same period a year earlier, Bloomberg data show.
“It will take some time for the China wallet to return to the same level,” said Khattar, adding that activity will eventually come back as investors better
understand the policy landscape.
He expects activity in the private capital market in China to return around the second quarter of next year and the public market to start recovering in the second half. While Deutsche Bank’s investment-banking presence in China is comparatively smaller than its rivals, Khattar sees China as an important market that will continue “to be core to the bank and
provide opportunities.”

sunnyvale escort greek how do i get a hooker off craigslist