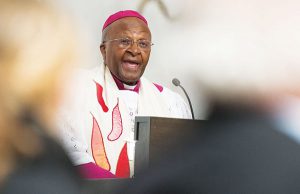 Archbishop Desmond Tutu, who won the Nobel Peace Prize for his opposition to racial discrimination in South Africa, has died. He was 90.
Tutu died on Sunday in Cape Town, President Cyril Ramaphosa’s office said in a statement. He was diagnosed with prostate cancer in 1997 and underwent surgery. Tutu was subsequently hospitalized several times to undergo treatment for infections and other ailments.
As South Africa’s first Black Anglican archbishop, Tutu used his international profile to lobby for sanctions against the White-minority government. From 1996 to 1998, he led the Truth and Reconciliation Commission, aimed at exposing the injustices of the past.
“Desmond Tutu was a patriot without equal; a leader of principle and pragmatism who gave meaning to the biblical insight that faith without works is dead,” Ramaphosa said.
Tutu’s brand of activism was shaped by his religious conviction, a mischievous sense of humor and physical bravery that once led him to rush into a mob to save the life of a young woman about to be lynched on suspicion of being a police informer.
The Anglican church will plan his funeral and other memorial services with the support of the South African government and the city of Cape Town, Archbishop Thabo Makgoba said in a statement. Details of these events, to be held under Covid regulations, will be announced later. “This is a moral universe; God is in charge of this world,” was a favorite saying of the man who, as archbishop of Cape Town, liked to wear a T-shirt emblazoned: “Just Call Me Arch.”
Born on October 7, 1931, in Klerksdorp, west of Johannesburg, Tutu worked as a teacher before entering a theological seminary. He was ordained as an Anglican priest in 1961, obtained a master’s degree in theology at King’s College, University of London, and in 1975 was appointed Dean of Johannesburg, the first Black person to hold the post. With many of South Africa’s Black leaders in jail, including Nelson Mandela, and others in exile, Tutu emerged as a leading voice of Black defiance against apartheid.
He became general secretary of the South African Council of Churches, an organization at the forefront of the struggle against White-minority rule, in 1978. He called for economic sanctions against the apartheid regime, in defiance of a law that made it illegal to advocate such actions. The government responded by withdrawing his passport.
In 1984, the Nobel Committee awarded Tutu its annual Peace Prize, citing his “role as a unifying leader figure in the campaign to resolve the problem of apartheid in South Africa.” Tutu was appointed Archbishop of Cape Town, titular head of the Anglican Church in southern Africa, in 1986 and held the post until 1995 when he was named to lead the Truth and Reconciliation Commission.
Tutu openly wept while listening to victims of South Africa’s pre-1994 system of institutionalized racial discrimination, yet opposed Nuremberg-style trials for those responsible for the atrocities.