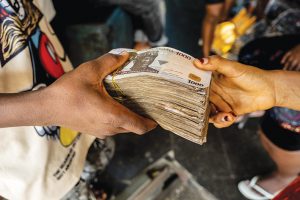 The naira slumped to a record low against the dollar on the widely used illegal market as Nigerians rushed to buy greenbacks a week after the central bank said it would redesign higher-value notes.

Currency traders in the unauthorised parallel market offered as much as 830 naira per dollar in Lagos, said Umar Salisu, a bureau de change operator who tracks the data in the nation’s commercial capital. The record low widens the spread between the official exchange rate, which closed at 442.49 to the dollar, to the largest-ever gap of 88%.

Demand for dollars in Africa’s largest economy has surged since the central bank last month announced a plan to replace 200, 500 and 1,000 naira notes from mid-December. The old bills will cease to be legal tender at the end of January. The central bank argues that the redesign will mop up excess cash and help it better control money supply, while curbing criminality. As much as 85% of currency in circulation is outside the vaults of the nation’s banks, as has been the case for decades in Nigeria.

Street traders of the currency have had to pool resources in order to meet the increased demand, Salisu said. “Buyers come and we don’t have enough to give them, so we share the business with other traders.”

In the capital, Abuja, where rates are generally higher, the naira traded as high as 845 per dollar, while in the northern commercial city of Kano, the rate hit 830, according to street traders.

Nigeria maintains a multiple-exchange-rate regime, dominated by an official spot rate that is tightly controlled by the central bank. In the unauthorised black market, the currency is freely traded.

Finance Minister Zainab Ahmed warned that the currency redesign may weaken the naira as residents rush to change the old notes. But President Muhammadu Buhari backed the central bank, arguing the move would punish currency hoarders and curb inflation that hit a 17-year high in September.