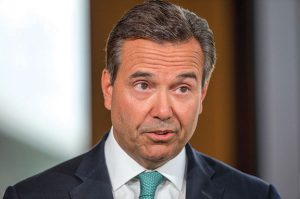 Credit Suisse Group AG’s Chairman Antonio Horta-Osorio resigned after just nine months in the role, following a series of missteps including reported breaches of Swiss and UK quarantine rules that eroded
confidence in his leadership.
His departure follows an investigation commissioned by the board, Zurich-based Credit Suisse said in a statement. The bank named board member Axel P. Lehmann as Horta-Osorio’s replacement, effective
immediately.
The sudden exit follows a disastrous year at Credit Suisse, in which the twin scandals of Greensill Capital and Archegos Capital Management cost the bank more than $5 billion and slashed the stock by a fifth. The former Lloyds Banking Group Plc chief executive officer had joined the bank with a mandate to repair the damage and revamp the risk-taking culture at the Swiss lender.
Details of Horta-Osorio’s quarantine breaches first emerged little more than a month ago, revealing that he had returned to Switzerland from the UK on November 28 and left for the Iberian peninsula before a mandated 10-day period of quarantine was over.
The bank at the time said it “regretfully acknowledged” that Horta-Osorio breached quarantine rules by leaving Switzerland before his period of isolation was over.
An apparent earlier quarantine break, in July 2021, emerged in the course of an internal investigation into the Swiss breach. The executive had visited the Wimbledon tennis finals in London during that month, in contravention of UK Covid regulations at the time, Reuters reported.
“I regret that a number of my personal actions have led to difficulties for the bank and compromised my ability to represent the bank internally and externally,” Horta-Osorio said in the statement.
Horta-Osorio was widely seen as providing a firm, steadying hand at Credit Suisse after his tenure at Lloyds saved the UK bank from the brink of bankruptcy. But his departure may destabilise Credit Suisse further after he was brought in to work on the bank’s culture.
“We are committed to developing a culture of personal responsibility and accountability, where employees are, at heart, risk managers,” Horta-Osorio said in a statement in July when the bank published a scathing report summarizing the failures that had led to the loss incurred from the Archegos collapse. He repeated the message when the bank updated its strategy in November adding that risk management would be at the “core of our actions.”
Before joining Lloyds, Horta-Osorio ran Banco Santander SA’s British unit, as well as spending time in the U.S., Portugal and Brazil for various banks.
While CEO at Lloyds, Horta-Osorio was scrutinized by the board of directors for a potential breach of the bank’s expense policy while on a business trip after a newspaper raised questions about whether the lender had covered personal costs. The probe eventually found that Horta-Osorio had paid for his own expenses.
Lehmann was elected to Credit Suisse’s board in October and had been serving as chair of the risk committee. He joined the bank from rival UBS Group AG, where his roles included running the Swiss personal and corporate banking business. Before that, Lehmann spent nearly two decades at Zurich Insurance Group AG in roles that included chief risk officer.